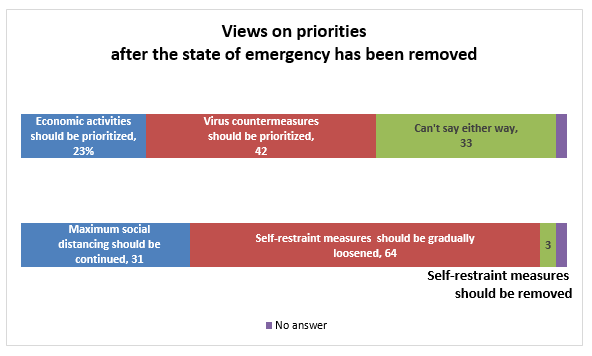 TOKYO — Some 53% of respondents to a May 23 survey by the Mainichi Shimbun and the Social Survey Research Center approve of the Japanese government’s moves to lift the novel coronavirus state of emergency for the entire country.

The government earlier lifted the state of emergency for 42 of Japan’s 47 prefectures, and was expected to do the same for the five remaining prefectures on May 25, including Tokyo. Thirty-one percent of respondents said the moves come too soon, suggesting deep-rooted anxiety that the virus will begin to spread again. Six percent of pollees said the end of the state of emergency was coming too late.

Meanwhile, when asked which should have higher priority, local economic activity or virus transmission prevention, 42% chose the latter. Thirty-three percent said they could not answer either way, and 23% said local economies were more important.

Regarding continued social distancing being called for by the government even after the state of emergency, 64% of pollees said they wanted to see a “gradual loosening of self-restraint measures.” Another 31% were in favor of continuing maximal social distancing, hinting that many people are having a tough time grappling with how to balance the risk of infection with their work and social responsibilities.

On the bungled extraordinary retirement age extension for Tokyo High Public Prosecutors Office chief Hiromu Kurokawa, of the 47% of respondents who said Prime Minister Abe and Justice Minister Masako Mori were both responsible and the 28% who answered that it was the prime minister who was solely responsible for the latest fiasco, more than 70% said they also disapproved of the government’s handling of the coronavirus pandemic. The significant overlap suggests a strong current of distrust over the perceived attempt by the Abe administration to meddle in public prosecutor personnel matters even as the people of Japan were struggling with the threat of infection and the related severe upheaval in their lives and livelihoods.

On the possibility of moving the start of the Japanese school year from April to September, 38% were in favor of the government examining the proposal — down 7 points from May 6 — and 36% were against, up from 30%. Twenty-six percent said they did not know.