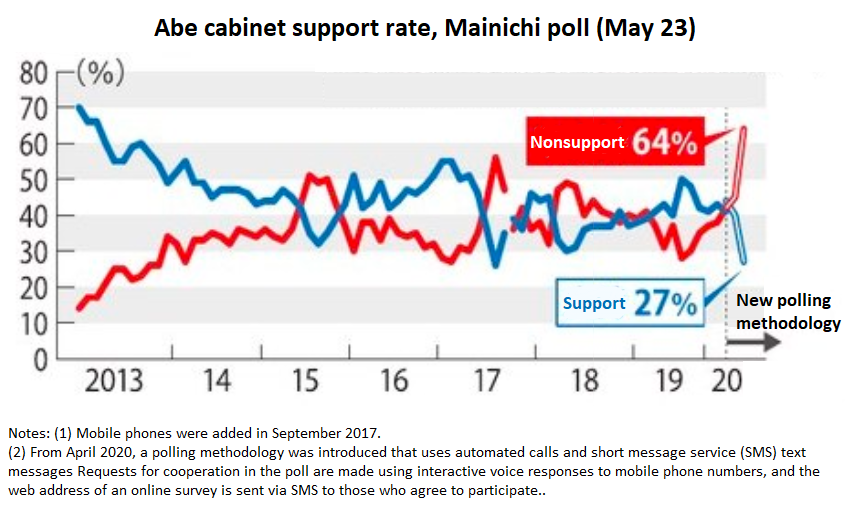 TOKYO — Public support for the Cabinet of Prime Minister Shinzo Abe has tumbled to 27%, according to a May 23 poll by the Mainichi Shimbun and the Social Survey Research Center, down from 40% who said they backed the Abe Cabinet in the previous survey on May 6.

The disapproval rating for the Abe Cabinet is up to 64% from 45% in the previous survey. The poll is the third conducted jointly by the two organizations. Support for the Cabinet has fallen by 17 points in the month and a half since the first survey on April 8.

As the Mainichi’s survey method has changed over time, straightforward comparisons are not possible, but the results indicate that the Abe Cabinet is experiencing a level of criticism and unpopularity not seen since July 2017. Then, at the height of a scandal over a cut-price land sale to nationalist school operator Moritomo Gakuen, a Mainichi telephone poll found support for the government down to 26%.

Fifty-two percent of respondents this time said former Tokyo High Public Prosecutors Office chief Hiromu Kurokawa, who resigned after it was revealed that he played mahjong for money with reporters during the coronavirus state of emergency, should have been given a disciplinary dismissal. Another 33% said it was only natural for him to resign from the second-highest position in Japan’s prosecution office.

Regarding the unprecedented Cabinet decision to postpone Kurokawa’s retirement, 47% of pollees said both Prime Minister Abe and Justice Minister Masako Mori were responsible, while 28% answered that it was the prime minister who was responsible for the latest fiasco. There has been a severe public backlash against the decision to extend Kurokawa’s retirement age, as many suspect that it had been done to install him, as a person close to the prime minister, in the top prosecutor-general role.

In all, only 15% said the Cabinet had no responsibility, while just 3% said Justice Minister Mori was responsible. The responses appeared to highlight a strong suspicion that the prime minister’s office had interfered politically with public prosecutor personnel matters.

Among the set of respondents who either said that both Abe and Mori had responsibility, or that Abe was responsible, just 13% expressed support for the Cabinet, while 78% said they disapproved it. It may be possible to conclude that the criticism over prosecutors’ personnel issues contributed to the significant loss of support for the Abe Cabinet.

Support for Prime Minister Abe’s ruling Liberal Democratic Party (LDP) was at 25%, down from 30% last time and nine points down from the 34% it scored in the poll before that. The fall in backing for the Cabinet impacted the numbers who identify as LDP supporters.

Among the other parties, the largest opposition Constitutional Democratic Party of Japan was at 12% support, up from 9% previously, Nippon Ishin (Japan Innovation Party) was stable at 11%, while the Japanese Communist Party was up to 7% from 5% last time. The LDP’s junior coalition partner Komeito saw support fall to 4% from 5%.

In the poll’s questions on the proposed revisions, respondents were polarized, with 38% saying they opposed an extension in the retirement age for public employees, while 36% said excluding the rules on extensions for senior prosecutors, the bill should be enacted. Just 12% said the bill should be passed as-is.