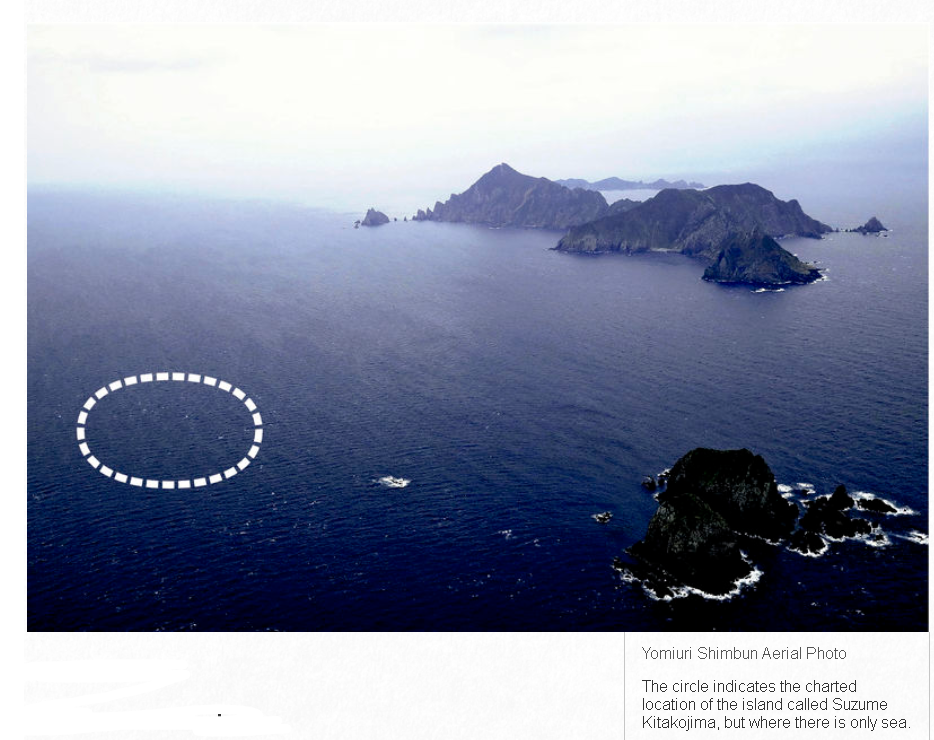 The fisherman has been plying the waters for three decades. But a question about a certain island in waters off Kagoshima Prefecture that appears on a government chart left him puzzled.

“I’ve been passing through [those waters] for years and there’s no island or anything,” he said. “I wonder why it’s on the map.”

Among the many remote “border” islands that serve as reference points to determine Japan’s territorial waters and exclusive economic zone, there are a number whose existence cannot be confirmed, The Yomiuri Shimbun has learned.

The case of the Kagoshima island shows the possibility of inaccuracies in the maps and charts used to prove the presence of border islands. This indicates that Japan’s territorial waters could be narrower, and show the difficulties of an island nation like Japan to survey and certify nearly 500 remote islands serving as its border.

In 2007, the government enacted the Basic Law on Ocean Policy and other laws for the conservation of remote islands, saying they play an important role in the securing of marine resources. By 2017, the Cabinet Office had officially named or carried out the procedures for nationalizing 60 remote inhabited islands and 424 remote uninhabited islands — including the Senkaku Islands in Okinawa Prefecture, where China has repeatedly intruded into Japanese territorial waters.

However, the government, aiming to get a grasp on the actual situation, conducted on-site surveys and using satellite images from that year, and discovered some islands among the uninhabited remote ones could not be confirmed.

The island named Esanbe Hanakitakojima off the coast of Sarufutsu, Hokkaido Prefecture, is believed to have been scraped away by ice floes and waves.

There are other similar islands, but the Cabinet Office would only said it is in the process of confirming them, without specifying a reason.

According to sources, there is no island where one called Suzume Kitakojima is marked on maps and marine charts off the coast of Minamisatsuma, Kagoshima Prefecture.

Suzume Kitakojima is estimated to have an area of about 35 square meters, but an aerial survey conducted by The Yomiuri Shimbun found only a wide expanse of sea at the location. The Cabinet Office certified the island based on maps by the Geospatial Information Authority of Japan and marine charts by the Japan Coast Guard (JCG), but has not conducted an on-site survey.

A JCG official acknowledged that there may not be an island at the marked location.

“The marine chart was drawn from a survey using an airplane. It is possible that instead of being not there, an island might have been shifted during the drawing process from its actual location,” the official explained.

According to the JCG, the charts are allowed to highlight the presence of islands to prevent accidents by ships. However, it is feared that the territorial waters could narrow by more than 0.5 square kilometers.

A Cabinet Office source said, “Because of the great distances, there are many islands that will take time to investigate,” adding, “The certification procedure is appropriate and on-site inspections are progressing. If any discrepancies are found, we want them to be corrected.”

“Tensions with neighboring countries over maritime rights and interests are mounting, and the location of the islands must be clarified in order for the international community to uphold claims related to national borders,” said Koji Furukawa, a professor at Chukyo University on international relations theory and an expert on border islands.

“The problem is the result of a delay in the carrying out surveys.”

He added there are logistical hurdles to overcome.

“There are nearly 500 border islands, and it takes time and labor for the government to survey them all. It may be necessary to obtain the cooperation of fishermen and local municipalities.”