Abe moved quickly to lift state of emergency in Japan 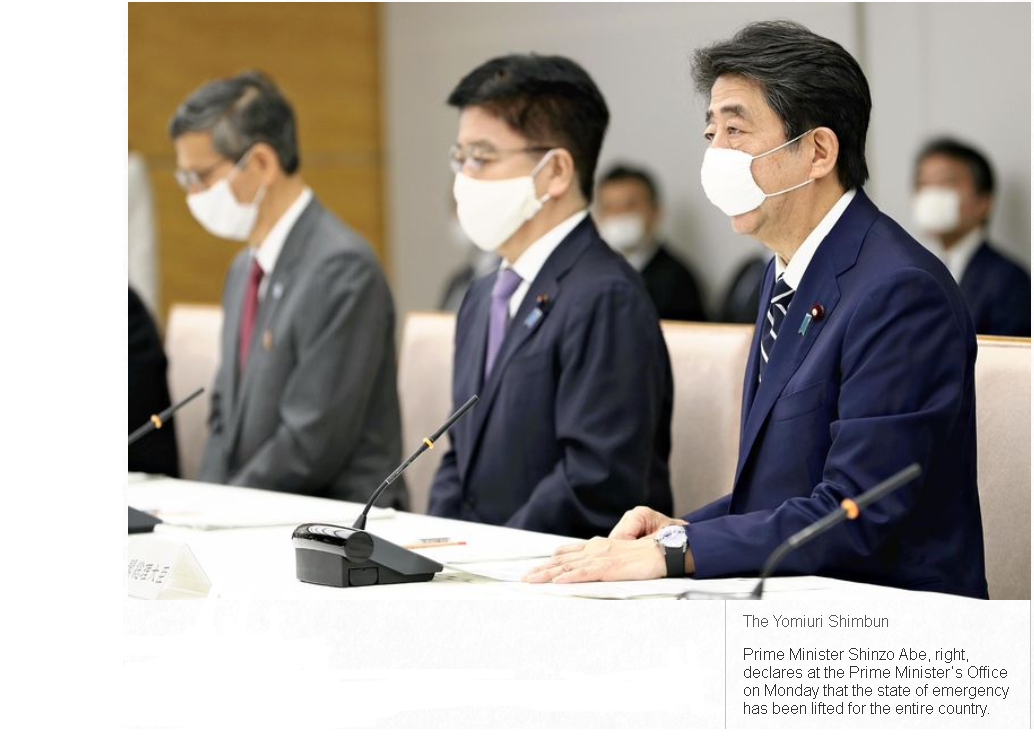 The state of emergency over the new coronavirus was fully lifted before the initially scheduled end date of May 31 out of concern over growing distrust in the government and the deteriorating economic situation caused by prolonged stay-at-home requests. The major challenge now is to contain a second wave of the virus, balancing resumed economic and social activities with measures to prevent infection.

“People’s work and lives cannot continue under the existing measures to strictly limit economic and social activities. Economic recovery is the starting point of the Abe government,” Prime Minister Shinzo Abe said at a press conference Monday. He also indicated that the government would ease restrictions on movement, such as stay-at-home requests, and make all-out efforts to restore the economy.

There have been strong concerns among government officials, including Chief Cabinet Secretary Yoshihide Suga and Deputy Prime Minister and Finance Minister Taro Aso, about the negative effects of the extended state of emergency on the economy.

At a meeting at the Prime Minister’s Office on May 20, when the state of emergency was still in effect for eight prefectures including Tokyo, Suga argued that it should be fully lifted on May 21. However, as of May 20, the number of new coronavirus cases in Tokyo was slightly over the criteria of 0.5 or fewer new infections per 100,000 people over the preceding week.

Ultimately, the state of emergency was lifted on May 21 for just Osaka, Hyogo and Kyoto prefectures in the Kansai region.

However, the government moved up the date for deciding about Tokyo, three neighboring prefectures and Hokkaido from the originally scheduled Thursday to Monday. The infection situation in Tokyo improved and the criteria of 0.5 or fewer cases per 100,000 people was fulfilled after May 21.

Abe was more confident, so he decided on May 22 to lift the state of emergency for the entire country, including Kanagawa Prefecture and Hokkaido, which had struggled to reach the standard for new infections. Abe met with Yasutoshi Nishimura, the minister in charge of economic revitalization, at the Prime Minister’s Office and instructed him to resume sporting and other events in a manner that is clear to the people.

The Prime Minister’s Office hastily lifted the state of emergency for the entire country apparently because it wanted to shorten the stay-at-home period, even if only slightly, to ease public frustration with the government over the revision of the Public Prosecutors Office Law and confusion related to the across-the-board ¥100,000 cash payment, among other issues.

Measures implemented at the initiative of the Prime Minister’s Office have been unpopular, such as the provision of cloth face masks to each household and Abe’s stay-at-home Twitter video. “No matter what we do, nothing will work now,” an aide close to Abe complained.

Abe reportedly told aides that once economic and social activities are fully resumed, the public atmosphere will improve significantly, anticipating that completely lifting the state of emergency will help resolve the situation.

However, if another large-scale coronavirus outbreak occurs in the future, it will inevitably lead to criticism that the government lifted the state of emergency too early.

“As soon as we let down our guard and fail to take infection prevention measures, the virus will quickly spread again. This is the scariest aspect of the virus,” Abe said with a stern look at the press conference. He called for public cooperation, saying, “If people continue to adopt a new lifestyle, we can avoid the worst-case scenario.”

Shunpei Takemori, a professor at Keio University and a member of the government’s Advisory Committee on the Basic Action Policy, said to reporters after the meeting Monday, “This does not mean that the red light has turned green. We hope people will live their lives under a yellow light, so to speak.”