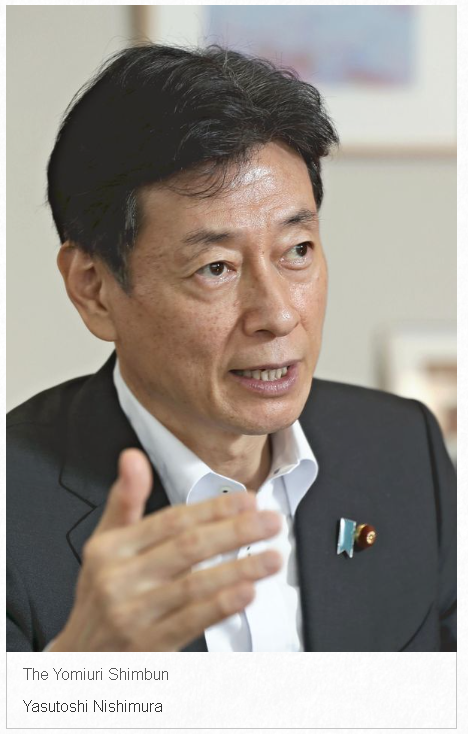 Yasutoshi Nishimura, economic revitalization minister who is also in charge of measures to deal with the novel coronavirus, spoke about handling the epidemic in an interview with The Yomiuri Shimbun on June 4.

The Yomiuri Shimbun: What are the problematic points of the revised law on special measures for new types of influenza, which stipulates the government can declare a state of emergency?

Nishimura: From the aspect of usability, I felt that the special measures law contained some problems.

First, it is about prefectural governors’ authority based on Article 45. Governors of areas under a state of emergency can urge businesses to voluntarily close, thus the article makes the governors able to take strong measures. We were able to keep the number of infected people and the death toll much lower than in the United States and Europe, and I want to express my gratitude to the public, however, there were people who did not comply with the requests. A legal system with decrees and punishments is likely being considered.

Moreover, during the state of emergency, governors are able to set up temporary medical facilities. But it is necessary to allow governors to set up such facilities in preparation for a second wave of infections, even if a state of emergency is not declared. When medical institutions have room, it is necessary to improve the conditions for medical care to prepare for the second and third waves of infections.

Q: Has the government set clear numerical criteria for again declaring a state of emergency?

A: Certain criteria are necessary. Just as when the state of emergency was declared on April 7, we have numerical figures in mind. The first is if the number of newly confirmed infections in the past week is around 5 per 100,000 people; the second is if the percentage of infected people whose infection routes cannot be traced approaches 50%; and third, if the number of infected people doubles within 10 days.

Additionally, in order to respond quicker, we have been thinking that it is necessary to consider the second figure at about 30% and the third figure at within five days.

Because the novel coronavirus has an extremely complicated nature, I have kept certain criteria in my mind. But we do not make judgments merely based on numerical figures. I want as many people as possible to understand that point.

Q: How about guidelines for preventing infections when reopening nightclubs in which employees entertain clients in close-contact settings and clubs with live music, some of which have caused infection clusters?

A: The government’s basic outline of how to handle them sets the possible date of reopening those businesses for June 19. Such clubs need time to prepare before reopening. I hope each business sector settles their discussions in about a week from now.

The guidelines are likely to contain such requirements as installing acrylic boards to separate customers, employees wearing face shields and maintaining social distance among customers. As I heard that business operators have been discussing various ideas, I want them to compile measures while paying consideration to their circumstances and business structure.

To purchase acrylic boards, sanitizing agents and other necessary items, I want business operators to utilize the subsidy for sustaining businesses of up to ¥2 million, which the government included in the fiscal 2020 first supplementary budget.

Q: The spread of infections has damaged supply chains. How will the government help their reconstruction?

A: It has become clear how deeply we had relied on China for masks, protective suits and other medical items. It is risky to rely on a single country for procurement of these goods, so we should build a system in which more medical items can be produced in Japan in an emergency. We should further diversify Japanese companies’ supply chains.

Protectionist tendencies are rising worldwide. Now is the time for Japan to make free trade evolve and it is important to consider a framework in which trustworthy countries mutually provide medical supplies and other essential products. I hope Japan will soon hold dialogue with Trans-Pacific Partnership member countries where coronavirus outbreaks are ending, such as Australia, New Zealand and Vietnam.

Q: The government set up a team inside the Cabinet Secretariat for transmitting information about Japan’s measures to countries overseas.

A: At this point, Japan has been able to prevent an “overshoot” in the increase of patients and a collapse of medical services only with requests for voluntary restraint that do not force compliance, which is different from lockdowns that strictly restrict movement. The number of infected people and the death toll are also much lower than in the United States and Europe.

However, in other countries, some cast doubt on the reason why Japan has fared well only with non-compulsory actions. Because there is a view that it may be because the number of PCR tests conducted has been small, it is important to offer clear explanations to people abroad.

As I’m also the minister in charge of TPP, I led a team for the government’s TPP-related measures. The team has a lot of experience in international affairs, and concurrently serves as a team for international tasks, in order to strengthen the conveying of information.

Q: How do you maintain balance between measures to cope with the novel coronavirus and those for economic revitalization?

A: Since the state of emergency was lifted, Japan has entered a phase in which we are gradually expanding economic activity, while conducting measures to prevent infections. What should be broadly promoted in the wake of it all is digitization of society and the economy. If remote work, teleconferencing and electronic signatures become widely accepted and work becomes more efficient, it can result in improving companies’ productivity.

Progress in digitization will make the value of data more important and each member of the public will be a source of wealth. The Japanese government has called on other countries to realize DFFT (data free flow with trust) through which countries will be able to smoothly handle data beyond national borders. We should consider a system that can distribute to individuals wealth brought about by transborder data.