TOKYO — Japan’s “weird” approach to containing the new coronavirus and its results have left many observers baffled. Now as the government prepares to reopen the nation’s economy, it is also stepping up its public relations campaign to help people overseas understand its strategy.

“Japan’s Halfhearted Coronavirus Measures Are Working Anyway,” read the title of an article published in Foreign Policy magazine on May 14. The piece marveled at how “everything seems to be going weirdly right” even though “Japan appears to be doing everything wrong.” A translation was later published in the Japanese edition of Newsweek and widely quoted in Japan.

Japan’s death rate per capita is among the lowest in the world even though widespread testing — the foundation for both clinical care and broader containment — has been slow to come online.

Many foreign media are skeptical of relaxing restrictions on economic activity before the testing regime is further strengthened. That has Japanese officials worried that other countries may hesitate to permit entry to Japanese visitors unless the government’s strategy gains more international credibility.

Officials are focused on explaining the concept the “3 Cs” — closed spaces, crowded places and close-contact settings — which is the core of the government’s strategy. These three conditions create a perfect breeding ground for the virus when all are present, and people are advised to avoid such situations. Officials also want to communicate the reasons for prioritizing clusters of infections. 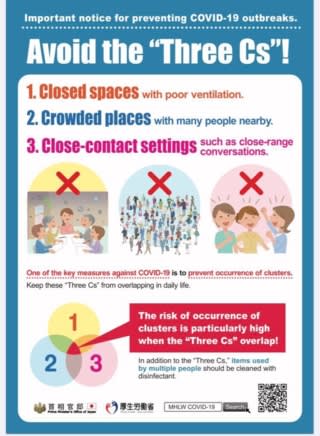 The government believes that Japan can prevent clusters and contain the virus if everyone works to avoid 3c situations.

Since the nationwide state of emergency was lifted, the government has worked to improve its outreach to overseas media. It implemented a system in which it answers questions online, and on June 1 Shigeru Omi, a member of the government’s expert advisory panel, and officials from the Cabinet Secretariat, the Foreign Ministry and the Health Ministry held a press conference to answer questions from foreign journalists.

There are three key questions from foreign media, according to Japanese officials involved in the public relations campaign.

One concerns Japan’s lack of widespread testing. Since there are likely many unknown infections, foreign media ask if it is not risky to loosen restrictions on activity.

The government argues that stopping the spread of infections depends more on controlling clusters, rather than finding every instance of positive infection. Four out of five people who test positive do not pass the virus on to others, officials point out. Among the remaining 20% are the super spreaders, who infect a disproportionately large number of people. Targeting these super spreaders is the best way to control the spread of infection.

A second common question is why many other countries have failed to get their outbreaks under control despite their own efforts to target clusters.

Japan’s game plan to tackle clusters has one notable feature. Like other countries, Japan also tests those who come into close contact with others who have tested positive for the virus. But Japan also tries to find locations common to multiple patients in order to find super-spreading events. Officials then test as many people as possible who were present at these events. This method aims to find the sources of clusters, and it is also the approach being taken in Taiwan.

The third question regards the 3cs. Japan is the only country that has adopted this concept as a part of its official guidelines for the outbreak, leaving some foreign media skeptical of the idea.

Some countries have maintained strict restrictions on human contacts while also reopening their economies, but Japanese officials argue that most clusters so far have occurred in situations where the 3cs are present. The government believes that Japan can prevent clusters and contain the virus if everyone works to avoid 3c situations.

Japan’s message is the excessive restrictions on economic activity are not needed as long as people avoid the 3cs and appropriate clusters response measures are taken.

As countries around the world try to balance restarting economic activity and infection control, Japan’s approach is drawing attention. Germany’s Der Tagesspiegel reported on May 29 that the country should emulate Japan’s handling of COVID-19, while Yahoo! USA on May 30 reported that the 3C message is a new approach to contain the coronavirus.

But many Japanese are skeptical of the government’s ability to balance economic reopening and virus containment. Unless Japan can significantly improve its testing capacity, it will not be able to accurately assess the arrival of a second wave of infections. Public anxiety will continue to grow as long as the government says it focuses on tackling clusters, unless officials quickly disclose how far they can track transmission routes.

Explanations for foreign media also show that the government has not provided clear enough explanations to its own people. Officials are likely reluctant to risk being held responsible in the case of a spread of infections.

Japan’s coronavirus approach is walking a thin tightrope. From June 19, the Japanese government is set to lift restrictions on cross-prefecture movement. If the number of patients with unknown transmission routes increases, authorities will again need to restrict activity to a level at which clusters can be traced. If Japan is forced to declare a state of emergency yet again, it will erode public confidence in the government and its approach.