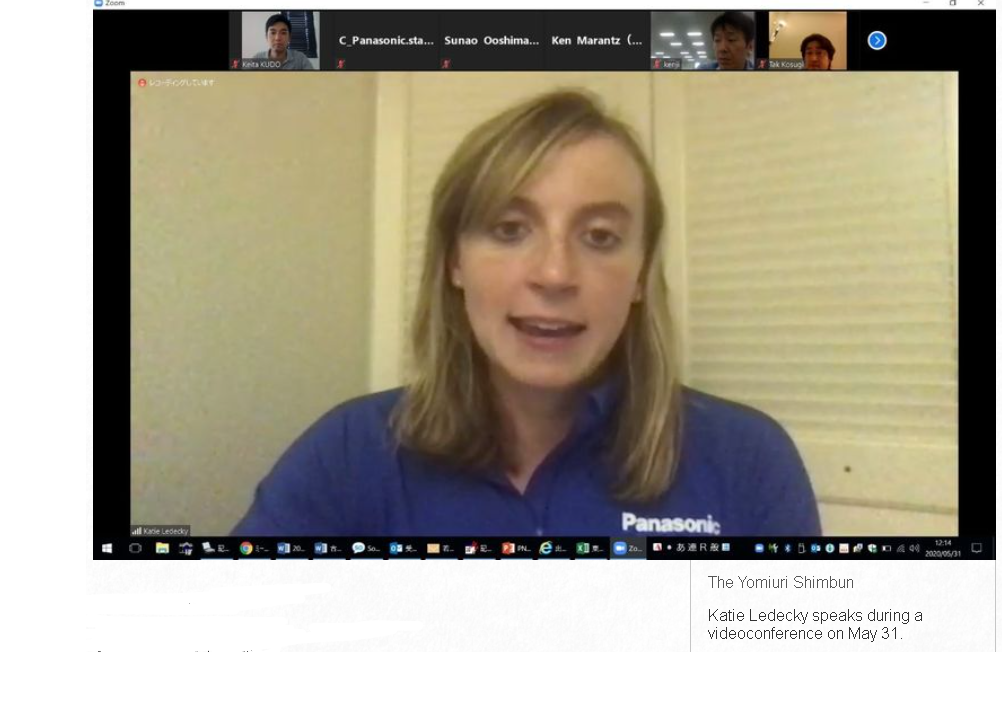 With the Olympic-sized pool at Stanford University closed, Katie Ledecky still found a way to get in her swimming workouts. When the gyms in the area shut down, the American star wedged some weight training equipment into her apartment.

Adjustments to changing conditions are part and parcel to the life of a world-class athlete, and the five-time Olympic swimming gold medalist is doing her best to go with the flow in a world turned upside down by the coronavirus pandemic.

The postponement of the 2020 Tokyo Olympics, where she intends to take home five gold medals, and the uncertainty of when competitions of any kind will resume, has dry-docked her usual plans for the season.

“We adapt as athletes, we adjust, and this is just one of those new things that we have to adjust to,” the upbeat Ledecky said in a recent videoconference interview with The Yomiuri Shimbun and The Japan News.

“When I think about the Olympics next year, I am very hopeful that we will be able to have the Olympics and that we are all able to come together.”

The 23-year-old freestyle specialist said she was disappointed when the decision to delay the Games was announced, given the years of preparation she had already put in, but was relieved that the powers that be did not opt for the more drastic alternative.

“I knew that it was the right decision for our health and for the world as a whole,” she said. “You know, it just didn’t make sense for the Games to be held this summer. So I was also very glad that they were postponed, and not canceled … It would have been very difficult to wrap our heads around a cancellation.”

Of course, the Games are still treading water, so to speak, with organizers hopeful the pandemic can be contained in enough time.

Ledecky, a psychology major at Stanford in the San Francisco Bay Area, remains confident the International Olympic Committee, Japanese government and Tokyo organizers will not allow the Olympics to go on if safety cannot be assured for the athletes, staff and spectators.

“I’m going to trust them and trust our United States Olympic and Paralympic Committee to make those decisions … to ensure a healthy and safe Olympic Game,” she said.

“From what I’ve heard, it seems like they are very committed to doing that, and starting those conversations. I hope that in the coming months, we’ll get a better understanding of that, and kind of learn what the Olympics will look like.”

Ledecky expects that some form of virus countermeasures prevalent today, from masks to social distancing, will still be necessary should the Games open as scheduled in July next year.

Her haul from world championships totals 15 golds and three silvers, but would surely have been more had she not come down with a stomach virus at last year’s competition in South Korea, causing her to only compete in two events. She is the current world record-holder in the 400, 800 and 1,500.

The women’s 1,500 free has been added to the Olympic program for Tokyo, giving Ledecky a chance at four individual golds (she also plans to compete in the 4×200 free relay). But she’s not thinking in terms of numbers.

“I don’t set a goal in terms of medals or number of medals,” she said. “I kind of look at each event individually and think about what kinds of times I want to achieve, and I kind of plan out what it’s going to take to achieve those things. But yes, I am very excited about the 1,500 being added to the Olympics.”

With her previous back-to-back victories in the 800 free, Ledecky is halfway to matching Japanese wrestler Kaori Icho as the only women to win gold medals in the same event at four consecutive Olympics. Not that she needs that for motivation.

“I don’t ever think about anything that far into the future,” she said. “I’m really just focused on my goals for [Tokyo] 2020. I know the statistic that I don’t think any female has won the 800 three times in a row. That’s on the table, I guess.

“But I don’t really use those things to motivate me. That’s kind of for the history books. I’m more just focused on individually what I want to accomplish. I would love to go to more Olympics beyond Tokyo, I know that for sure. But I still know I need to take it year-by-year at this point.”

The Ledecky history starts when she joined a local swimming club at age 6 with her older brother in the Washington suburb of Bethesda, Md. She would also play basketball and soccer, but it took a broken arm in the former to lead her to focus on swimming.

“When I was about 11 or 12 years old, I broke my arm playing basketball, and that’s kind of when I started to shift more towards swimming. I started to realize that I really love swimming, and it was really hard that I had to be out of the water because I had this broken arm.”

These days, Ledecky has been able to get into the water thanks to a neighbor, who has allowed her to do daily workouts in their 25-meter backyard pool. She has also been weight training with equipment that she purchased.

“Right now my goal is just to stay in shape, just to kind of maintain my level of fitness and my feel for the water, knowing that pools will hopefully start to open up pretty soon and at that point I can get back into more of a training rhythm and start making some real progress,” she said.

Ledecky said it would normally take her five or six weeks after a long break to “start feeling normal again in the water,” and that she usually puts in two or three months of hard training before her first competition. Having access to the pool puts her ahead of the curve for the day that meets can be restarted.

“I feel pretty good about where I’m at right now,” she said. “I mean, if you told me there was a swim meet next week, I would be ready. I probably wouldn’t swim my fastest times ever, but I think I would be capable of racing at this point.”

While performing well in Tokyo will be the main objective, Ledecky also sees the big picture in how the Games can serve as a focal point for the world’s recovery from the crisis.

“The Tokyo Olympics in 2021 could be one of the best Olympics ever. It can really bring our world together in a time of need, in a time when we’ve been so isolated from one another.

“It’ll give [everyone] something to cheer for and be happy about. I kind of get goose bumps when I think about it.”