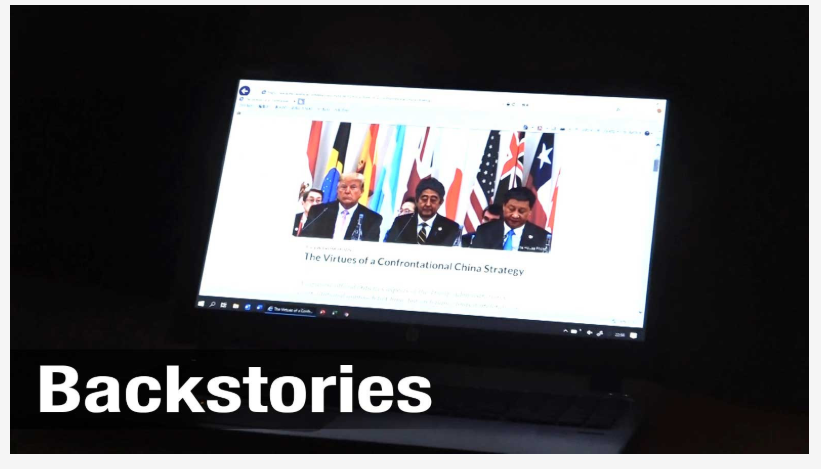 Masuda Tsuyoshi
NHK World Senior Commentator
In April, an article by an anonymous Japanese government official caused a stir within diplomatic circles. It examined the current state of US-China relations and argued in favor of Washington’s ongoing confrontational approach. Some said it reflected the Japanese government’s true position on the state of affairs between the two superpowers.

The article, titled “The Virtues of a Confrontational China Policy, appeared in The American Interest, a US foreign policy magazine. The author went by the initials Y.A. and described themself as a Japanese government official.

While acknowledging the deficiencies of Trump’s approach on China, the writer took aim at President Obama’s policy.

“While President Obama was talking about possible cooperation with China on global issues in a bid to make a responsible stakeholder out of a rival, Beijing was busy sending military ships to the Senkakus and creating artificial islands in the South China Sea.”

It added, “Until its last day the Obama Administration believed China was shapeable.”

The article also noted that since Trump took office, Japan has been able to formulate an Asia policy with the US that focuses on “maximum pressure toward North Korea” and a “free and open Indo-pacific.”

“For all of President Trump’s various shortcomings, it looks like Japan finally has someone in the White House who properly recognizes and appreciates the challenge.”

Immediately after the article’s publication, debate began raging online about the author’s intentions. Nakayama Toshihiro, a professor at Keio University and an expert on US-Japan relations, says he believes the piece reflects the feelings of many within the Japanese government.

“I can understand the article because, from a Japanese standpoint, it sometimes felt like Obama was not quite aware of China’s hegemonic ambitions in the region,” he says. “The article conveys the frustrations of a Japanese official.”

But he also says it was misguided to publish an article so heavily critical of a previous US administration.

“Taking a partisan position, supporting Trump and almost insulting Obama was a very unwise act,” he says. “I don’t think it was a smart move, diplomatically speaking.”

Nakayama adds that, with the presidential election coming later this year, it was senseless for a government official to nail Japanese colors to one candidate’s mast.

“It seems more and more likely that this will be a close election,” he says. “And whoever is elected, Japan will have to deal with that leader. Writing the piece was dangerous in that respect.”

And the article did not go unnoticed by members of the Democratic Party. Daniel Russel, who served as Assistant Secretary of State in the Obama administration, was critical of the mystery author.

“I was irritated,” he says. “The oversimplification, the stereotype, the caricature of Republicans and Democrats that lingers still in some quarters of the Japanese Foreign Ministry, is both misleading and badly out of date.”

If Russel’s feelings are shared throughout the Democratic Party, the Japanese government could be facing the prospect of less sympathetic allies in Washington starting next year. And if that’s the case, the anonymous article will have had the opposite of the author’s desired effect.