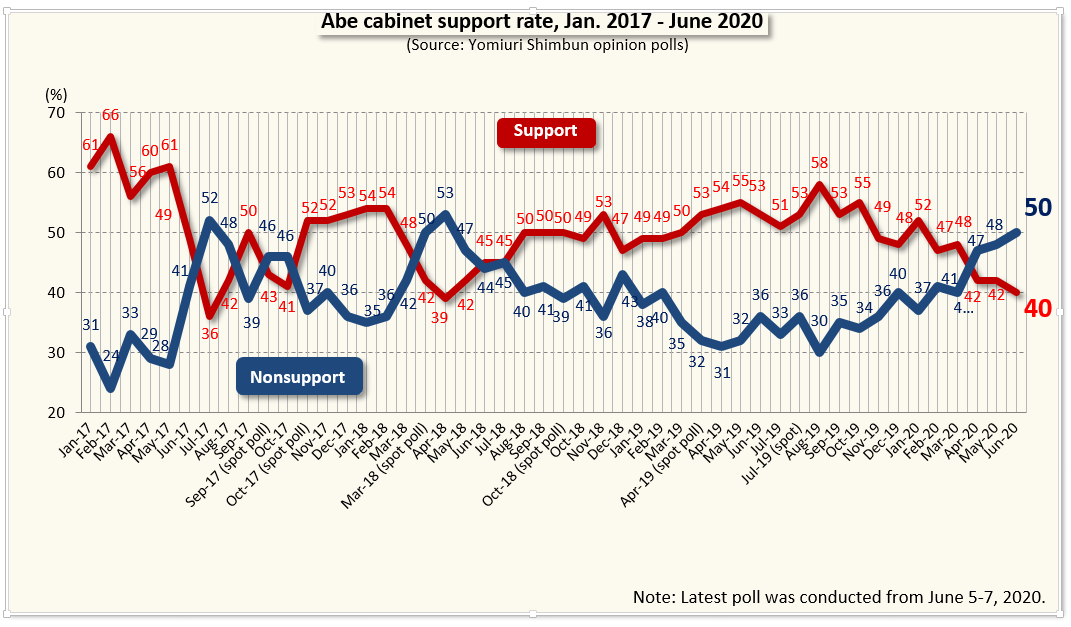 According to the nationwide public opinion poll conducted by the Yomiuri Shimbun on June 5–7, a plurality of 64% of respondents are dissatisfied with the economic measures the government has taken to address the new coronavirus. This figure greatly exceeds the 27% who said they are satisfied with the measures. This result is thought to be affected by the stagnation in the administrative work to disburse “business continuity subsidies” worth up to 2 million yen in cash to small and medium-sized enterprises and cash handouts worth 100,000 yen to each citizen.

Meanwhile, 49% of respondents said that they disapprove of the government’s handling of the new coronavirus so far (poll conducted on May 8–10: 58%), and 42% said they approve (34%).

The Abe cabinet support rate was 40%, essentially unchanged from the 42% found in the previous poll. The nonsupport rate was 50% (48%). This is the first time for the nonsupport rate to enter the 50% range since the April 2018 poll (53%) when Prime Minister Shinzo Abe was under fire for the scandals surrounding Moritomo Gakuen and the Kake Educational Foundation.

Hiromu Kurokawa, former head of the Tokyo High Public Prosecutor’s Office, resigned after admitting to participating in high-stakes mahjong [during the period of the state-of-emergency declaration]. The government issued a reprimand, rather than disciplinary action. A plurality of 68% of respondents said that the punishment was too lenient, exceeding the 26% who said that it was appropriate.