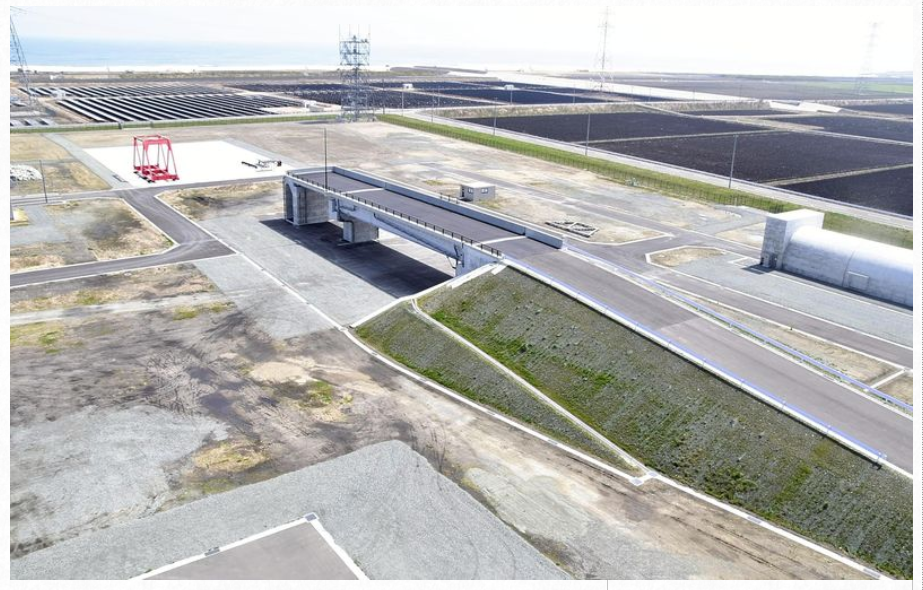 Yomiuri Shimbun file photo / A test facility for robots, based on the Fukushima Innovation Coast Framework, is seen in Minamisoma, Fukushima Prefecture on March 31. The facility is equipped with a bridge for testing, and solar panels are lined up on the seaward side of the facility that were rice paddies before the Great East Japan Earthquake.

The government is aiming to set up an international education and research center to help rebuild coastal areas in Fukushima Prefecture, which were devastated by the Great East Japan Earthquake and the nuclear accident at Tokyo Electric Power Company Holdings, Inc.’s Fukushima No. 1 nuclear power plant.

This plan envisions research fields unique to the areas affected by the nuclear disaster, such as decommissioning technology. The center is also expected to contribute to solving the problems of Japan as a whole, such as population decline.

The road to reconstruct Fukushima continues to be difficult. Even in areas where evacuation orders have been lifted, the number of residents is less than 20% of the pre-disaster level. Only about 30% of the 12 municipalities around the plant have resumed farming.

A panel of experts of the Reconstruction Agency said in the proposal that the Fukushima Innovation Coast Framework — a national project to concentrate new industries in coastal areas of the prefecture — had just been regional efforts that lacked horizontal ties among research institutions and administrative organizations. The proposal compiled on Monday suggested that the new research center should serve as a control tower for industry creation and human resource development through industry-government-academia cooperation, to accelerate the Fukushima Innovation Coast Framework. It is also suggested that establishing universities and graduate schools, that are strongly requested by local governments, should be considered in the future.

The region that Fukushima is trying to model is located near the U.S. nuclear facility, Hanford Site, in Washington State, where plutonium had been purified for military purposes. Research institutes and companies working to clean up radioactive contamination had gathered, and the industry has since developed in cooperation with local governments. The population has nearly doubled in 30 years from about 150,000 in 1990.

The proposal said the research center in Fukushima should focus on primary industries, energy and robots, which is expected to develop into related industries, in addition to reactor decommissioning technology and radiation safety, “which can only be studied in Fukushima.” It also said the center should become an ultimate model for regional revitalization that will offer solutions to problems common across the country, such as population decline, a shortage of farmers and global warming.

Masahiro Sakane, chairman of the panel and adviser of major Japanese construction machinery manufacturer Komatsu Ltd., said, “Fukushima can start with a clean slate, although other regions have various restrictions,” showing hope to attract talented people and promising start-ups from Japan and abroad through drastic regulatory reforms. His comments are based on his experience as a member of the government’s council on national strategic special zones.

The new research center will be partially opened in the spring of 2023, with the aim of fully opening by March 2025. An official of the Reconstruction Agency said, “[The schedule] is quite tight, but if there is too much time [before opening], the interest [of universities and others who want to collaborate with the center] will decrease.” Before the ten-year anniversary of the earthquake next year, a blueprint must be drawn that will appeal to many young people and companies.