Russian lawmaker on US-China power game: Don’t play us ‘as a card’

MOSCOW — Russia wants to avoid being drawn into a new U.S.-China Cold War, a senior Russian lawmaker told the Nikkei Asian Review in an exclusive interview this week.

Konstantin Zatulin, deputy chairman of the State Duma’s committee for relations with the Commonwealth of Independent States and Russian nationals abroad, stressed Moscow does not want to be “played as a card by either China or the United States” in their geopolitical race to the top.

“A global confrontation [between Beijing and Washington] is not at all beneficial for our country, which today is not on the same level as China or the United States in terms of GDP or rate of development,” he said.

“We oppose the proposal of the United States to surround China with a ‘sanitary fence’ and create problems for it,” Zatulin added. “Likewise, we don’t want to demonstrate an entente or alliance with China, to adopt an unconditional pro-Chinese position on all issues, just because we have a difficult relationship with the United States.”

Tensions between the U.S. and China have sharply escalated over the past several months, with the countries exchanging barbs over the coronavirus pandemic. The Trump administration has accused China of withholding information about the severity of its outbreak and threatened to pursue economic “decoupling” with Beijing.

Against this background, Russia has emerged as one of China’s most vocal defenders. During a phone call with Chinese President Xi Jinping on April 16, Russian President Vladimir Putin hailed China’s leadership for taking “consistent and effective actions” to combat the spread of COVID-19.

Similarly, the Russian Foreign Ministry has dismissed criticism of China’s handling of the outbreak as “groundless” and slammed demands that Beijing be punished for the pandemic as “unacceptable.”

Senior Chinese officials have thanked Russia for its support and suggested that the health crisis could help raise Chinese-Russian relations to new heights. Chinese Foreign Minister Wang Yi last month told reporters that the pandemic had demonstrated that Beijing and Moscow had formed “an impregnable fortress” against Western criticism, adding that “China is working with Russia to turn the crisis into an opportunity.”

Zatulin explained that Russia “does not support U.S. attacks against China, and attributes them to the fact that the U.S. health care system did not show itself up to the task in the battle against the pandemic.”

“Now the United States has a desire to shift responsibility onto someone else,” he said. 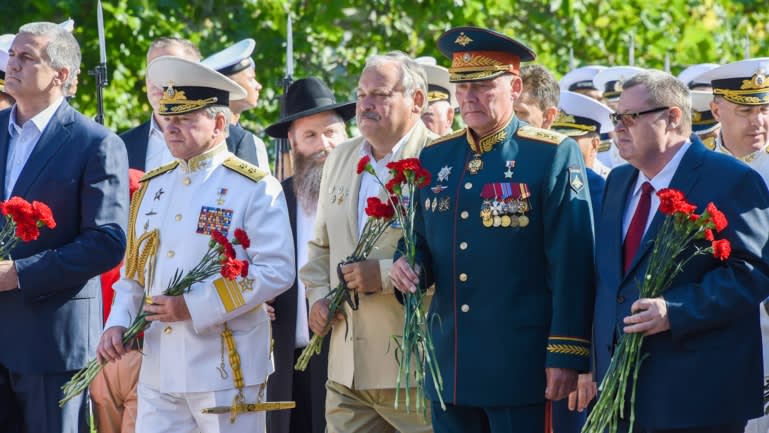 Russian lawmaker Konstantin Zatulin, at center in the beige suit, attends a Navy Day event with other officials in July 2019.   © AP

Nevertheless, Zatulin disagreed with Wang’s characterization of the coronavirus as an “opportunity” and emphasized that Russia “does not regard it necessary to use the pandemic to develop relations to someone else’s detriment.”

“We want cooperation with both China and the United States,” he said. “It is true that we today have an easier time finding common ground with China than with the United States, but we hope that will not be the case forever.”

Still, Zatulin conceded that despite Russia’s reservations about becoming too closely aligned with China, “the actions of the United States are pushing us together.”

He told Nikkei that Washington’s foreign policy made it difficult for Moscow to pursue better relations not just with the U.S., but also with American allies in Europe and Asia.

“The current approach of the United States, which is supported by both Republicans and Democrats, involves carelessly exiting international treaties, escalating sanctions and escalating rhetoric toward Russia,” Zatulin said. “Such an approach of course creates problems because it forces dependent countries to constantly choose whether they are in favor of relations with Russia or whether they will submit to the position advanced by the United States.”

Earlier this year, the Trump administration announced that it will not extend the New START Treaty — the last remaining arms control agreement between the United States and Russia which is set to expire in February 2021 — unless the deal is expanded to include limitations on China’s nuclear arsenal. Marshall Billingslea, the Trump administration’s newly appointed arms control envoy, has repeatedly stated that Washington expects Moscow to bring Beijing to the negotiating table.

But Zatulin told Nikkei that Russia had no intention of pressing China into trilateral arms control negotiations.

“We will not, under instructions from the United States, exert pressure on China to accept certain conditions for disarming,” he said. “We are in favor of arms control talks, but we will not be a courier for delivering U.S. threats and ultimatums to China.”

More broadly, Zatulin stated that Russia “absolutely cannot support” any efforts by Washington to form a coalition against Beijing.

“We must ask ourselves: What will happen as a result of China being encircled,” he said. “Is this not a game on the brink, with the potential for World War III or some other unforeseen consequences? Is such a game in the interests of the United States, because the perception emerges that the United States has the vulgar attitude that the faster they deal with China the better.”

Over the past several years, Moscow and Beijing have strengthened their military cooperation amid rising tensions with the West. The two countries now regularly hold joint military exercises and Russia has begun selling China some of its most sophisticated arms, such as the Su-35 fighter jet and the S-400 missile defense system.

Zatulin told Nikkei that even as Russia pursues deeper military cooperation with China, he hopes it will stop short of forming a military alliance with its powerful southern neighbor.

“We shouldn’t be anyone’s junior partner, and in the case of a military bloc with China or a bloc with the United States against China, we will find ourselves in the role of the dependent, backwards partner,” he said. “I think that we should maintain more room for maneuver, and that our role should be to restrain both sides from extremes rather than to become an appendage to either China or the United States.”