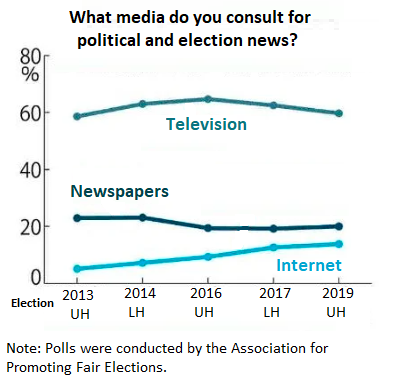 In a poll it conducted after the 2019 Upper House election, the Association for Promoting Fair Elections asked respondents what news sources they regularly consult for news on politics and elections. Some 13.8% of pollees said the Internet while 20.0% said newspapers and 59.7% said television. In the polls the association has conducted in recent years, the figures for television and newspapers have remained essentially unchanged while the percentage of pollees selecting the Internet has been on the rise.

Asked what media they consulted at the time of the 2019 Upper House election (multiple responses permitted), 8.0% said election campaigns via SNS. This is less than the 40.3% who said they watch the candidates’ campaign broadcasts on the television and the 37.7% who said they read election bulletins. More than half of those reporting they used SNS, however, said that the information was helpful.