2,000 Taliban POWs to be freed before “peace talks:” Afghanistan ambassador to Japan 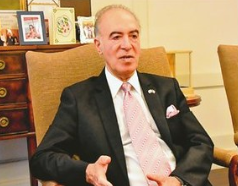 Afghanistan Ambassador to Japan Bashir Mohabbat told the Mainichi Shimbun on June 10 that the Afghan government plans to newly release 2,000 Taliban prisoners of war in addition to the 3,000 POWs who have already been released to date. The Taliban has demanded the release of 5,000 POWs as a condition for starting peace talks with the Afghan government. Ambassador Mohabbat said, “There will be peace talks soon.”

The release of POWs was included in a peace agreement signed by the Taliban and the U.S., which acted as a mediator, at the end of February. But the Afghan government has been reluctant to release POWs out of concern that releasing Taliban POWs would undermine the country’s security. According to the ambassador, the Afghan government changed its stance at the urging of the U.S. At the same time, the envoy stressed that the Taliban POWs will be freed on the condition that “the group reduces its violence.”

Before reaching the agreement with the U.S., the Taliban accepted a de facto ceasefire for seven days as a “violence-reducing measure.” Ambassador Mohabbat said, “A similar measure may be taken” to start peace talks.

The peace agreement between the Taliban and the U.S. states that the Afghan government, the Taliban and various political forces in the country will participate in the peace talks to discuss a permanent ceasefire and the establishment of a political system.

According to the envoy, details of the talks have not been finalized, but Doha, the capital of Qatar, where the Taliban has a political office, is proposed as a venue for the peace talks. The Afghan government, however, will not accept the ruling of the country under strict Islamic law as demanded by the Taliban, the ambassador said.