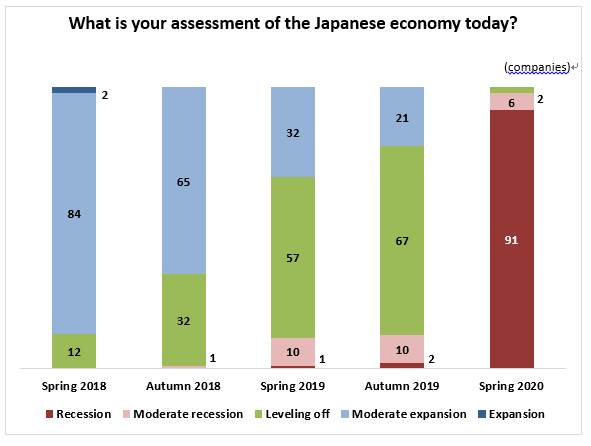 By Eisuke Eguchi and Tomohiro Yamamoto

In the Asahi Shimbun nationwide survey of 100 leading companies, 97 companies said that the domestic economy is currently in a recession, a dramatic rise from the number of companies (12) that gave that response in the previous poll conducted in November 2019. The major factors behind this are the drop in personal consumption and in corporate profits due to the coronavirus pandemic. Business confidence among the companies has dropped to its lowest level.

The Asahi Shimbun conducts this survey of 100 major companies nationwide twice a year. The recent poll was conducted from June 1–12, 2020. Interviews were conducted with top executives of slightly less than 40% of those 100 companies. Some of the interviews were conducted online. Business sentiment has been on a decline since 2018, but that trend suddenly accelerated in the recent poll. Business confidence is at the lowest level since the November 2008 poll, which was taken immediately after the Lehman crisis. In that survey, a total of 98 companies described the economy as being in a recession.

A full 91 companies said that the domestic economy is currently “in a recession,” increasing greatly from the two companies that gave that response in the previous poll. Another six companies said that the economy is “in a moderate recession.” In the autumn 2019 poll, 10 companies gave that response. Many executives talked about the novel coronavirus crisis. Sumitomo Chemical President Keiichi Iwata said, “The Japanese economy is in a deep recessionary phase as stagnation in the flow of people and goods has exerted downward pressure.”

Two companies that said the domestic economy is “leveling off,” a major drop from the 67 that gave that response in the previous poll. Not a single company said the economy is either “moderately expanding” or “expanding.”

Asked to give up to two reasons for their assessment of the domestic economy. The most frequently given response was “personal consumption” (82 companies). Suntory Holdings President Takeshi Niinami commented: “Personal consumption dropped significantly since a state of emergency was declared.”

Other responses given as reasons for their assessment of the Japanese economy include “corporate profits” (59 companies), “exports” (19), and “employment situation” (14). Mitsui & Co. President Tatsuo Yasunaga commented, “Exports face a harsh situation as overseas demand has disappeared with the lockdown.”

The poll asked the 97 companies that described the economy as being in a recession when the economy would hit bottom. A total of 33 companies said “summer of 2020,” making it the most frequently given response. Asked when the economy would return to the level it was at before the coronavirus situation became a full-fledged pandemic (i.e., to the level around January 2020), 45 companies said “in autumn of 2021 or later.” A notable number of companies did not indicate a time in their response, saying it is difficult to foresee how things will unfold.

[Polling methodology: The survey was conducted of 100 leading Japanese companies nationwide from June 1–12, 2020. Interviews were conducted with top executives at slightly less than 40% of those 100 companies. Some of the interviews were conducted online. Some companies did not answer some of the questions, so the total number of respondents does not total to 100 for each question. Questions and answers have been abbreviated in some cases.]