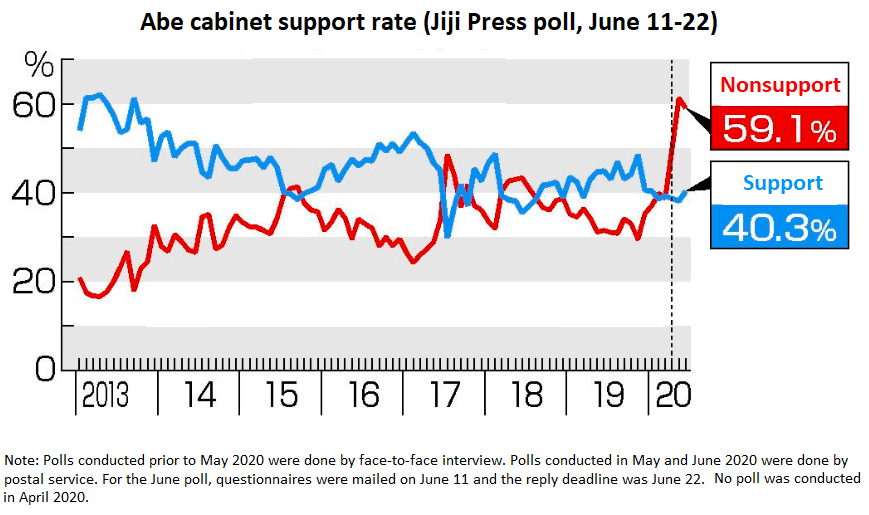 The disapproval rate staying relatively high can be partly attributed to the arrests on June 18 of former Justice Minister Katsuyuki Kawai and his wife, Anri, for allegedly violating the public offices election law.

In the latest poll, conducted through mail, 54.8 pct of its respondents said they do not appreciate the government’s response to the COVID-19 epidemic, while 44.2 pct said they do.

The government’s over-230-trillion-yen emergency economic package to tackle the COVID-19 crisis was considered “not sufficient” by 50.8 pct and “sufficient” by 46.2 pct.

The mail survey covered 2,000 people aged 18 or older, with 49.3 pct of them giving valid responses. In the survey, questionnaires were mailed on June 11, with the reply deadline set for last Monday.

Of those who backed the Abe cabinet in the poll, 26 pct said there is no one, other than Abe, who is fit to be prime minister, 11.7 pct said they trust Abe, and 7.2 pct said he has good leadership skills.

Of those who disapproved of the cabinet, 42 pct said Abe is unreliable, 40.3 pct said they cannot expect from his cabinet, and 26.1 pct said its policies are wrong.

Also in the survey, the ruling Liberal Democratic Party was supported by 33.9 pct of all respondents, up 3 points from the previous month, followed by the main opposition Constitutional Democratic Party of Japan, with 7.2 pct, up 0.6 point.

The support rate stood at 5.9 pct for Nippon Ishin no Kai (Japan Innovation Party), 4.3 pct for Komeito, the LDP’s coalition partner, 2.2 pct for the Japanese Communist Party, 1.5 pct for Reiwa Shinsengumi, 1.2 pct for the Democratic Party for the People, 1.1 pct for the Social Democratic Party and 0.4 pct for NHK kara Kokumin wo Mamoru To, a party critical of public broadcaster NHK, or Japan Broadcasting Corp.

The proportion of respondents who did not support any party came to 40.8 pct.