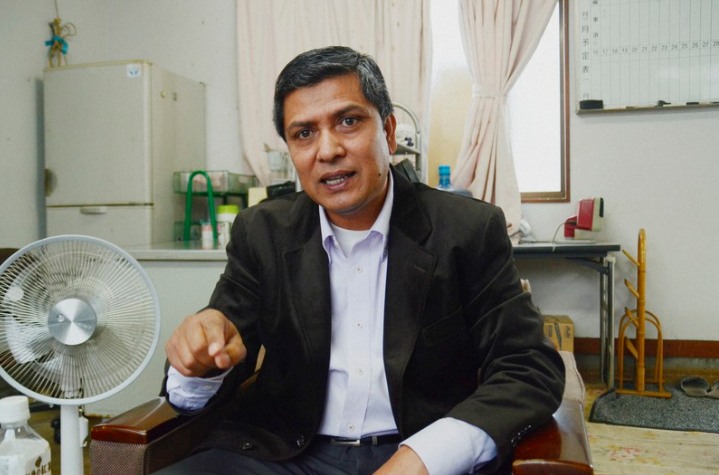 The Rohingya are a Muslim minority, many of whom have fled their own country of Myanmar after being oppressed by the Myanmar government for many years. It is said that over 1 million Rohingya live in refugee camps in Bangladesh. About 300 Rohingya live in Japan, with many living in Tatebayashi City, Gunma Prefecture. Only very few Rohingya, however, have been granted refugee status in Japan, and many Rohingya are forced to live in difficult circumstances. Zaw Min Htut (48; Moroyama Town, Saitama Prefecture), himself recognized as a refugee in Japan, works to improve the rights of refugees as executive director of the Rohingya Advocacy Network in Japan. Mainichi Shimbun sat down with him to talk about the situation surrounding Rohingya in Japan and Japan’s system for recognizing refugees.

Mainichi: Describe the background to your leaving Myanmar.

Zaw Min Htut: In December 1996, while I was doing graduate studies at Yangon University, I engaged in demonstrations with a few hundred other students, calling for the democratization of Myanmar. Aung San Suu Kyi (who today is State Counsellor and Union Minister of Foreign Affairs of the Republic of the Union of Myanmar) lived near the university campus, and I had many opportunities to hear her speak. I also spoke to her in person once for two or three minutes. At that time, she encouraged me, saying, “I hope the university students will continue to push for the democratization of our country.” This made a strong impression on me. From around 1997, my friends, who led the demonstrations, started to be secretly arrested. My home in Rakhine State in western Myanmar was investigated, and the mother of an acquaintance of mine who had been arrested informed me that my name was on the list of people to be investigated. Over the next few months, I changed residences many times in areas near Yangon, but then I decided to leave the country.

Rohingya have not been granted civil rights or issued passports since 1982. I had a broker arrange a passport and visa for me. The broker also decided my destination. At that time, I knew no Japanese. “Zaw Min Htut” is not my real name. My real name sounds Muslim, so it was dangerous for me to use it when leaving the country. I left Myanmar in March 1998.

Held in detention for 11 months

Mainichi: What was your situation in Japan like after arrival?

Zaw Min Htut: I arrived at Narita Airport in the morning. I was so afraid during the flight that I had not slept and I was exhausted. I lined up at the immigration counter at the airport. At the advice of the broker, I had dressed like a businessman. Despite that, the Japanese officials immediately escorted me to a separate room. I was detained for about 11 months through March 1999 at the detention facilities in the Higashi-Nihon Immigration Center in Ushiku City, Ibaraki Prefecture. I applied for refugee status in April 1998. My application was denied, and I filed a lawsuit. The trial lasted for four years. An immigration lawyer named Shogo Watanabe (representative of the Japan Lawyers Network for Refugees), whom my uncle who had come to Japan earlier had introduced me to, took on my case pro bono. He and his associates gathered videos and news reports of the demonstrations [in Myanmar], examined other countries’ frameworks for the recognition of refugees, and won the case for me. In March 2002, two weeks before the court ruling, I was suddenly recognized as a refugee by the Immigration Office. I am sure Mr. Watanabe didn’t want to lose a case.

Zaw Min Htut: From the days of the lawsuit, I worked at a club in Roppongi [in the evenings] and during the day I met with human rights organizations and petitioned Diet members for the democratization of Myanmar and the acquisition of rights for Rohingya. In 2005, I married a Rohingya woman. The following year, I brought her from Myanmar to live with me in Japan. We moved to Tatebayashi City, and I worked at a factory. I kept losing my job when I took time off to do human rights work. With the help of an acquaintance, I have been running a shop that buys and sells secondhand bicycles, cars, and home appliances in Kawagoe City, Saitama, since 2009. Now I employ one of my younger brothers as well as Japanese and Nepali at the shop.

About 300 Rohingya live in Japan, but only a handful have refugee status

Mainichi: What is the situation like for Rohingya living in Japan?

Zaw Min Htut: In the 1990s, Rohingya started fleeing to Japan. About 300 Rohingya live in Tatebayahi City and in Saitama and Chiba Prefectures. Rents and prices are low in Tatebayashi, and there are many factories, so people naturally gathered here. To the best of my knowledge, only about 17 Rohingya, including me and the four members of my family, are recognized as refugees. Many have received special permission for residence on humanitarian grounds. Slightly under 20 are out of detention centers on “temporary release.” Those on temporary release are not permitted to work. It is hard for them to live in an expensive country like Japan. Also, they do not know when they might be placed in detention again. Some people have been living under such circumstances for 10 years or more.

Mainichi: It is said it is more difficult to gain refugee status in Japan than in other countries.

Zaw Min Htut: The United Nations and human rights organizations have written many reports on the oppression of the Rohingya. I have assisted most all Rohingya in Japan in applying for refugee status. I attach the reports to the applications as reference materials, but the Immigration Office shows no interest. They think, “These report are irrelevant. What proof do you have?” Even if you submit materials on the oppression of Rohingya, they ask for [specific] proof. Can photographs or videos be taken when a person is being carted away and beaten by the police or military? That is not possible. I had a hard time gaining refugee status, and I try to make it easier for other Rohingya to get it. Japanese screenings for the status are overly rigorous.

I hope Japan will take more interest in the refugee issue

Mainichi: Do you think Japanese society overall has little interest in refugee issues?

Zaw Min Htut: I am so glad that I came to Japan. The people are very kind and want to help those in difficulty. Many Diet members and supporters in addition to Mr. Watanabe help me. There is a problem with the Japanese government, though. The current administration places priority on the economy and is not interested in human rights issues. I would like to see the government have refugee issues around the world taken up more in classrooms. In Japan, only refugees know that June 20 is “World Refugee Day.”

Mainichi: Were Rohingya in Japan impacted by the novel coronavirus?

Zaw Min Htut: We created a phone tree with an app and use it to share information about how to make face masks and how to comply with the request to avoid nonessential outings. Most Rohingya in Japan work at factories or at part-time jobs, and they have not been given work since around April. They are managing by cutting down on food expenses. My company is also having a tough time as we no longer have purchases from overseas.

Rohingya hope to return to Myanmar

Mainichi: What are the refugee camps in Bangladesh like? Are there any signs that Rohingya will be able to return to Myanmar?

Zaw Min Htut: Some of my younger brothers and sisters and other relatives are in the refugee camps. One of my younger brothers told me that he moved three times due to flooding. A few days ago, there were heavy rains again, and he said that there is so much flooding that it is like a sea. The international community takes less interest than it used to. With the economic slump triggered by the novel coronavirus, donations and supplies are not coming in as much as they used to. The outlook is bleak so some refugees are trying to leave for Thailand and other places by boat. If they are refused entry to the country, they are stuck at sea with no place to go. The situation is dire.

I think all Rohingya want to return to Myanmar. This is premised, however, on their being recognized as citizens, being granted human rights, and being guaranteed safety. The massacre by the military in 2017 is the “last stage” of the oppression that continued for many years. If things stay as they are, the Rohingya will vanish from the face of the earth. I would like to see the international community put more pressure on the Myanmar government.

Mainichi: What are your plans for the future?

Zaw Min Htut: I will continue to work to support refugees and to resolve the Rohingya issue. In 2001, my father, who lived in Rakhine State, was taken into custody after I wrote a book on the Rohingya issue in Burmese. When I spoke to him on the phone after he was released, he said, “You must keep at it! You do something others cannot. If no one speaks out, we all will be killed!” My father has died since then. I will continue with my work, carrying his words in my heart until I die.