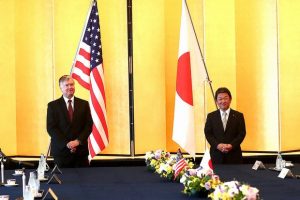 NHK reported in its noon news that Deputy Secretary of State Biegun held talks with Foreign Minister Motegi in Tokyo this morning. The network said that Motegi told the Deputy Secretary that under the robust Japan-U.S. alliance, Japan hopes to work together with the United States on common challenges to regional and international issues, including the situation in North Korea, and to further deepen their alliance. The broadcaster quoted Deputy Secretary Biegun as telling Motegi in reply that the United States and Japan have brought peace, security, and prosperity to Asia for more than a half century as close partners and that the United States hopes to cooperate further with Japan in dealing with new challenges.

The network said Deputy Secretary Biegun added that President Trump is looking forward to welcoming Prime Minister Abe to the G7 summit he will host at the end of August.