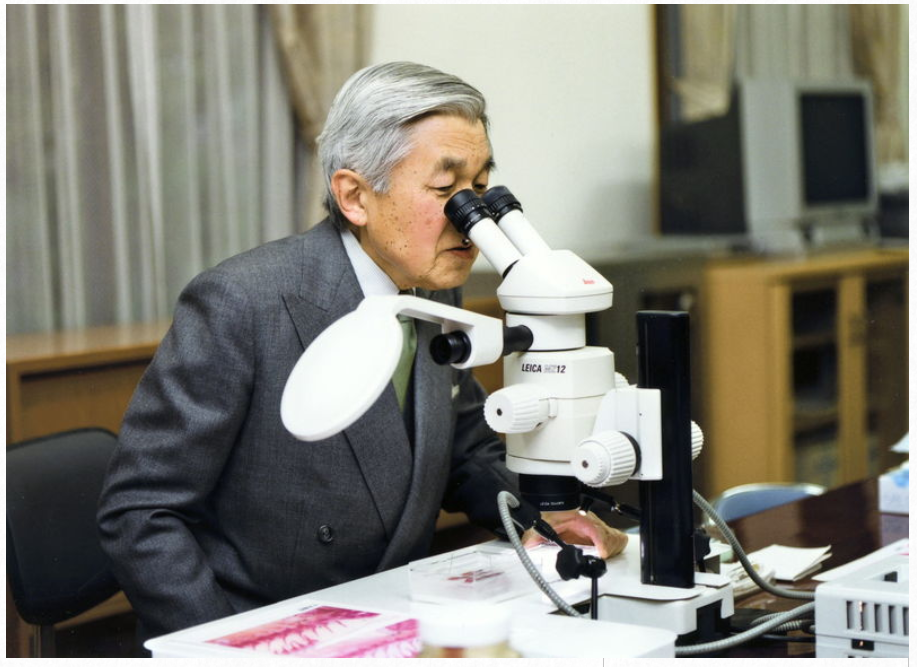 Courtesy of the Imperial Household Agency The Emperor Emeritus studies goby in March 2009 when he was emperor.

The Emperor Emeritus, who is known as a researcher of goby, discovered a new species of genus Callogobius that inhabits parts of southern Japan, it has been learned.

It is the ninth species that he has discovered, and the first finding in 17 years since 2003. This is also the first research finding since his abdication, and a related paper is expected to be published by the end of this year.

According to sources, the new species of genus Callogobius was collected by the Emperor Emeritus’ research staff more than 10 years ago in waters near Okinawa Prefecture. After examining the number and arrangement of sensory organs on the head, the Emperor Emeritus identified the species as a new finding. He is said to have already decided its name. Since he had been busy during his reign, he began writing a paper in earnest after his abdication in late April last year.

The Emperor Emeritus started studying the taxonomy of gobies in the 1960s when he was crown prince. He established a taxonomic method to classify species based on the sequences of sensory organs.

Tetsuji Nakabo, professor emeritus at Kyoto University specializing in ichthyology who supports the Emperor Emeritus’ study, said, “This method is still the basis for the taxonomy of gobies.”

When he was crown prince, the Emperor Emeritus published papers almost every year. However, he had been busy with official duties during his time as emperor and published only seven papers on gobies. At a press conference held on the 10th anniversary of his enthronement in 1998, he said at a press conference, “I feel like I’ve been away from research for a long time.”

The new species lives far away in waters near Okinawa Prefecture, so he needed the help of research staff, but it is not unusual for him to collect specimens himself.

In April of last year, he presented the result of a study on Rhinogobius, or a freshwater goby known in Japanese as yoshinobori, which he collected from a pond in the Kyoto Sento Imperial Palace. As a result of DNA analysis, the species was found to have been the crossbreed of biwa-yoshinobori (Rhinogobius biwaensis), which can be found in Lake Biwa, Shiga Prefecture, and shimahire-yoshinobori (Rhinogobius sp. BF) found in ponds in the Kyoto basin.

Since his abdication, the Emperor Emeritus visits the Biological Laboratory in the Imperial Household a couple of times a week at the most to engage in his study.

Nakabo said: “The Emperor Emeritus never compromises. If there even is a single question, he goes back to the specimen and examines. It’s amazing that he keeps on researching patiently at the age of 86.”