Below is an interview with 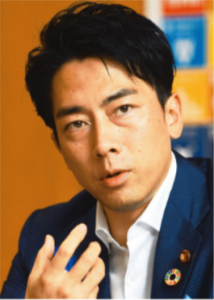 This is a very definite policy change. Japan, an environmentally advanced country, will begin a counteroffensive. That is my feeling, at least. As environment minister, the experience of being criticized at the 25th Conference of the Parties to the United Nations Framework Convention on Climate Change (COP25) (at the 2019 United Nations Climate Change Conference) had a profound impact. After that experience, I vowed to review Japan’s coal policy.

As other countries proceed with decarbonization, Japan’s energy policy has been at standstill since the 2011 Tokyo Electric Fukushima Daiichi nuclear plant accident. Japan has cut greenhouse emissions, a cause of global warming, for five years in a row. Japan also leads in measures against chlorofluorocarbons. Yet, Japan’s technological advancements and efforts by companies and Japanese people have been drowned out by the government’s coal policy.

In bowling, one needs to knock down the center pin to get a strike.The stricter export guidelines for coal-fired power have become the “center pin of energy policy.”  Under Minister of Economy, Trade and Industry Hiroshi Kajiyama’s leadership, inefficient coal-fired power plants in Japan will be phased out gradually by fiscal 2030. We will never again take actions that might cause Japan to be equated with coal power.

Nevertheless, climate change is not an issue that can be resolved by Japan alone. In our new strategy on infrastructure export, Japan will assist developing countries, including those in Southeast Asia, transition to a decarbonized society. Japan has a responsibility as an industrialized nation.

I believe Sankei’s position is to promote the resumption of nuclear power plants. In future reviews of energy policy, I believe that all options should be discussed based on facts. The policy on coal was reviewed because of fact-based discussions. The speed of technological innovation in the energy industry is fast. What was normal a few years ago may undergo drastic change. The price of renewable energy may seem high, but prices are decreasing in other countries. The goal of renewable energy achieving 22-24% of total energy composition in 2030 is reasonable. We should make an effort to raise the proportion of renewable energy even higher.

We are working on climate change policy because we are in a crisis now. No other country in the world has as many natural disasters as Japan – typhoons, floods, earthquakes, volcanoes, and avalanches. Even as we speak, Kyushu is dealing with the aftermath of torrential rains. There are no liberals or conservatives in environmental issues. Climate change policy is a matter of national security. It will not be realistic for Japan to continue its reliance on oil-producing nations. By increasing the proportion of renewable energy in Japan’s energy mix, we can increase its independence in securing resources. I would like to think about how we can build a sustainable nation.

How do I evaluate myself as a minister? It would be fairer to ask the members of the environment ministry. It is said that nothing is more unreliable than a politician’s autobiography. I am still proceeding by trial and error. I’m conscious of to how to keep my staff highly motivated when most of them are older than me

I am, of course, for constitutional reform. We have not been able to revise the constitution since the war. There are many procedural obstacles to revision. To realize revision, it is important to focus on specific themes rather than broad ideals. Under the current constitution, the people have more disadvantages than benefits. We should start by initiating a discussion on revising one part of the constitution.