Hayabusa2’s next mission narrowed down to 2 asteroids by JAXA 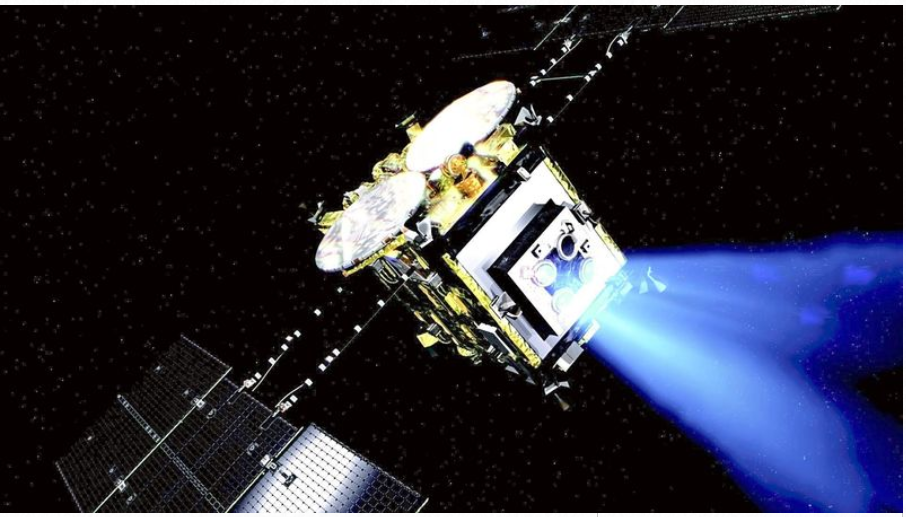 Courtesy of JAXA / Illustrator’s rendering of Hayabusa2 flying in space

The Japan Aerospace Exploration Agency, or JAXA, has shortlisted the candidates for the next destination for unmanned space probe Hayabusa2 to two asteroids orbiting between Earth and Mars. The mission is slated for sometime after the probe returns to Earth with a sample capsule in December, it has been learned.

The decision for the about 10-year trip to either asteroid will be finalized by autumn.

This will be the first time that a Japanese space probe completes its first mission and is used for another.

Hayabusa2, launched in 2014, reached its destination asteroid Ryugu in 2018 and made two successful landings in 2019. After about 1½ years of exploration, it is now returning toward Earth as planned. The probe collected what is believed to be rocks and other substances from Ryugu in a capsule and is expected to drop its payload on a South Australian desert Dec. 6.

When the spacecraft returns to Earth, the total flight distance will have been more than 5.2 billion kilometers. Unlike its glitch-prone predecessor Hayabusa, Hayabusa2 is still fully operational with about half of its main engine fuel expected to go unspent.

The candidate asteroids are 1998KY26 (about 30 meters in diameter) and 2001AV43 (about 40 meters). It is estimated that 1998KY26 is rich in water and organic matter much like Ryugu, and 2001AV43 is rocky like the Itokawa asteroid, which was explored by Hayabusa.

Both candidate asteroids, smaller than Ryugu’s 900-meter diameter, are believed to rotate at high speeds. They may have gone through a different formation process from that of larger asteroids. It will take about 10 years for Hayabusa2 to reach the asteroids, exceeding the time for which the probe’s use was designed. Therefore, it will be a one-way mission and not return to Earth. If the plan goes as expected, the spacecraft will examine the shape and materials of the asteroid through photographic imaging and other methods.