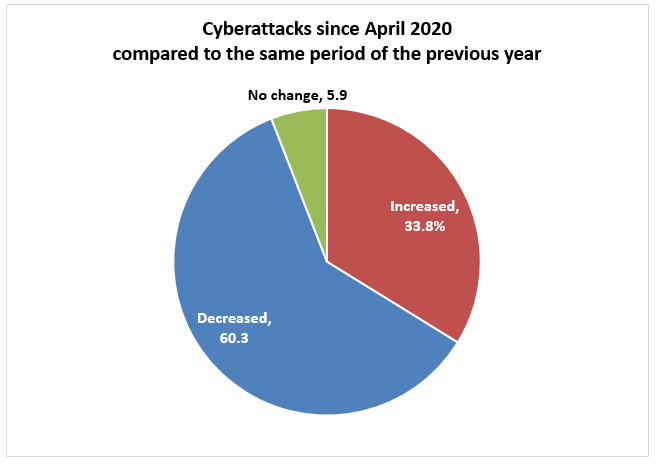 Cyberattacks targeting companies are increasing. In the Nikkei poll of 100 major companies, 30% of CEOs said that their company has been subject to more cyberattacks since April than in the same period of the previous year. A total of 15% of companies said that they have incurred damage from cyberattacks. Teleworking has spread due to the novel coronavirus, resulting in easy targets for attack. Further countermeasures are needed.

The 20 companies that reported cyberattack damage were asked what kind of attack they suffered. Given a list of options (multiple responses permitted), 11 companies said “suspension of internal systems and facilities,” and five companies said “suspension of the services we provide.” It seems that there are more attacks aiming to halt systems and facilities, which impact the very operations of the company.

Compared with connecting to company systems from the workplace, connected from home via the Internet is less secure. Some 33.8% of companies said that they have been hit by more cyberattacks since April 2020 than in the same period of the previous year. Of those, 20% said that attacks have more than doubled. Asked what means were used in the attack (multiple responses permitted), 80.7% said “email” and 29.7% said “illegal access to internal systems or services.”

[The survey was conducted from June 30 through July 15, with respondents including presidents, CEOs and chairpersons.] (Abridged)