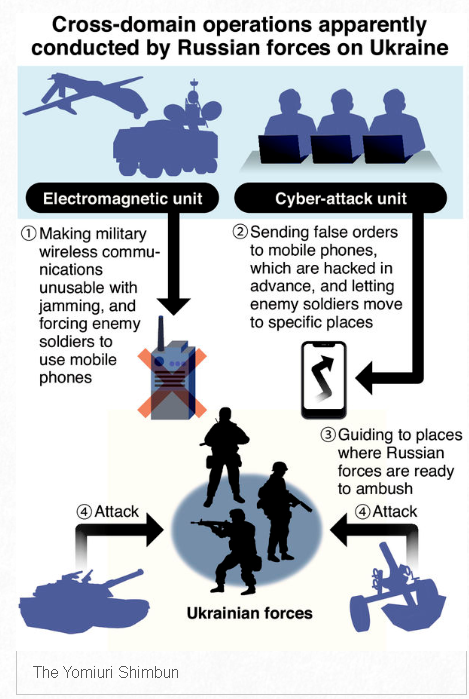 Future wars will no longer be won or lost on land, at sea or in the air. Instead, they are expected to be at the intersection of these traditional theaters of operations and the domains relating to outer space, cyberspace and electromagnetic waves.

One of the first of these large-scale cross-domain battles took place in spring 2014, when Russia was conducting operations in Ukraine.

According to sources in Japan’s Defense Ministry, Russia deployed various kinds of ground-based electronic warfare weapons to the front lines and interfered with the Ukrainian military’s wireless communications.

The sources also said that through the use of unmanned aircraft, the Russian military was able to gather information regarding the Ukrainian forces’ telecommunication activities and mobile phone use. With that information the Russian military found the locations of field commanding headquarters and then air-raided them. For these operations, Russia conducted a cyber-attack beforehand to obtain top-secret information about the Ukrainian military, including how to command and order them. They used it to issue “commands” that resembled real ones, the sources said.

Through these methods, the Russians, with about 15,000 soldiers, were able to take down the Ukrainians, who had about 50,000 soldiers.

“That is absolutely a cross-domain battle, isn’t it?” said Jiro Hiroe, director general of the C4 Systems and Intelligence Department of the Ground Self-Defense Force Staff Office. “It was a battle that fused together the use of electromagnetic waves, cyber operations and on-the-ground firepower.”

He presented the analysis at a GSDF seminar held in Yokosuka, Kanagawa Prefecture, in February this year. Hiroe had visited Ukraine in person where he learned about this “life lesson.”

Russia’s cross-domain operations were even beyond the imagination of U.S. forces. At that time, a senior SDF officer felt shocked after hearing a U.S. senior military officer guffaw in disgust.

The U.S. officer explained that U.S. forces had been busy in operations defeating terrorists in Afghanistan and Iraq and thus had not placed enough importance on cyber, electromagnetic waves and other new combat domains. The United States has completely lagged behind Russia, the U.S. officer said.

In October 2016, the United States, led by the army, hammered out an initiative called Multi-Domain Battle. Later, the initiative was renamed as Multi-Domain Operations (MDO).

The U.S. military now is aiming to conduct operations in all domains simultaneously and obtain capabilities to defeat enemy forces in this way.

Concerning the new battle domains, it is said that what Russia has accomplished is also being pursued by China.

A senior official of Japan’s Defense Ministry voiced caution, saying, “This is in contrast to Japan, where the Ground, Maritime and Air Self-Defense Forces separately try to maintain conventional defense equipment, traditional ways of fighting and respective budgets, which has resulted in delays to changes in the SDF.”

In December 2018, the Cabinet approved the National Defense Program Guidelines that regarded space, cyber-operations and electromagnetic waves as new domains, and openly presented a concept of building multi-domain defense capabilities.

Officials concerned with the matter have dubbed the new concept as USaDen — a combination of the first syllables of uchu (outer space), saiba (cyber) and denjiha (electromagnetic waves).

During the compilation of the defense program guidelines, sources said that officials related to the matter held a discussion under the assumption of an exchange of fire between the SDF and Chinese military. The officials concluded that the SDF are no match for the Chinese forces in terms of hardware, and thus the SDF should have the capabilities to paralyze Chinese military networks with USaDen.

However, there is no doubt that Russia and China will conduct combat operations in these new theaters of warfare without clearly differentiating between wartime and peacetime.

A senior SDF officer who participated in the discussion voiced a concern, saying, “Regarding electromagnetic waves or cyber affairs, we may only be one step behind under the exclusively defense oriented policy, but the SDF could be defeated.”

Yoshikazu Watanabe, a former GSDF general who had been commanding general of the GSDF Eastern Army, warned: “China is trying all its available means during peacetime, with the aim of winning without a hot war. What we regard as peacetime is not peacetime. We can’t fight unless we change our perceptions about national security.”

As the main battlefields have been shifting to new domains, it is a thing of the past for Japan to think that wars can be deterred only by relying on the United States’ strike capability, including its nuclear arsenal.

If Japan thoughtlessly continues its conventional stance of national security based on the concept that its territories are defended through a non-aggression policy, Japan will be unable to protect the nation’s safety in the long run.

To no longer show its weakness to China and Russia, it is imperative that Japan embarks on improving its capabilities in the handling of these new cyber and electromagnetic challenges on its own.