TOKYO/SAO PAULO — Chile has chosen a route proposed by Japan for the first fiber-optic cable to directly connect South America and the Asia-Pacific, designating Australia and New Zealand as endpoints while stopping short of landing in China, Nikkei has learned.

Japan’s route beat out a pitch by China that would have made Shanghai the final landing point. This decision comes amid a U.S. pressure campaign to keep China out of global telecommunication projects.

Under the Japanese proposal, the undersea fiber-optic cable would stretch roughly 13,000 km across the Pacific Ocean, pass through New Zealand then arrive at its terminus in Sydney. The Chilean government says this route is the highly recommended based on cost and feasibility.

Japan and Australia just completed their own submarine cable linking the two countries this month, meaning Japan could easily connect to the trans-Pacific cable. Both Australia and New Zealand share deep ties with Chile through the Trans-Pacific Partnership, the trade deal that Japan has pushed for.

The Japanese proposal to Chile took into account Australia’s hard-line position against China, exemplified by Canberra’s decision to blacklist China’s Huawei Technologies from its 5G infrastructure.

Chile was caught in the geopolitical crossfire as China, its largest trading partner, lobbied heavily for cable plan to have Shanghai as its terminus. When Chilean President Sebastian Pinera visited Beijing in April last year, Huawei pledged to invest in data centers in Chile.

Huawei initially emerged as the leading candidate for the undersea cable. But the South American country was unable to ignore U.S. intentions in diplomacy and trade. 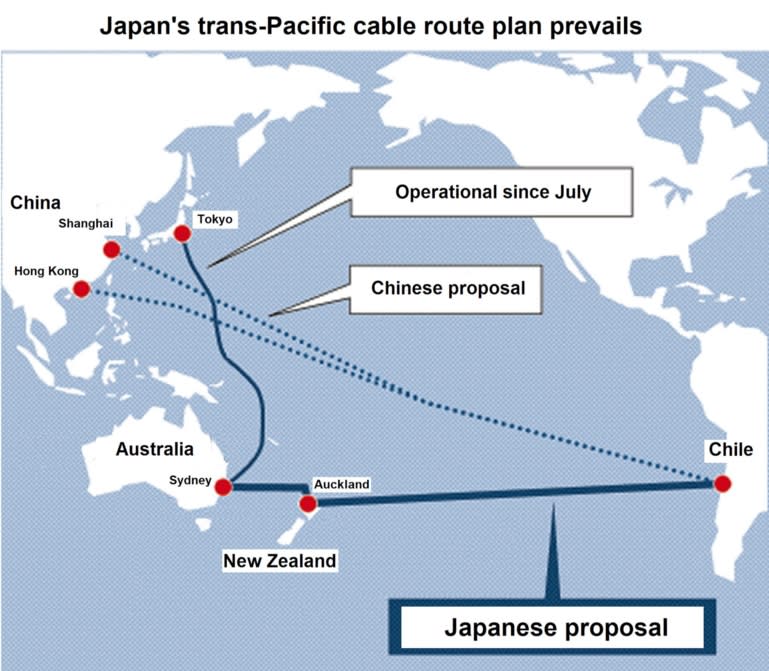 Right before Pinera’s China visit, U.S. Secretary of State Mike Pompeo arrived in Chile and accused Huawei of being controlled by the Chinese government, which would put Chileans at risk.

This June, the U.S. Justice Department released a filing recommending that a separate Pacific undersea cable backed by Google and Facebook should bypass Hong Kong. The document cited the risk of Chinese authorities collecting sensitive data.

Undersea cables carry 95% of international communications, including internet data. With the advent of smart devices and 5G communications, expanding the capacity of the optical cables has become a pressing issue.

Gloria Hutt, Chile’s transportation and telecommunications minister, has said her objective is to transform Chile into South America’s digital hub. The government is expected to release the final technological report this fall. A dedicated fund for the project will be established as soon as the end of the year.

Contracting bids are slated to be conducted next year, with the scale of the initial investments estimated to be $500 million.

With Chile adopting Japan’s route for the cable, Japanese companies will have an edge in winning contracts for supplying equipment. In the event that Japanese companies do win contracts, Tokyo plans to invest in and extend financing to the special purpose vehicle through the Japan Bank for International Cooperation and the Japan ICT Fund.

Japan’s NEC is one of the top three suppliers for undersea cables, along with U.S.-based Subcom and France’s Alcatel Submarine Networks. NEC recently completed a trans-Atlantic cable between Angola and Brazil.

Huawei, which had originally concentrated on short-distance cables, has expanded in recent years to undersea cables connecting Africa and Latin America. The company announced last June that it will sell its undersea cable assets, but the business will likely continue under the auspices of another Chinese telecom giant.