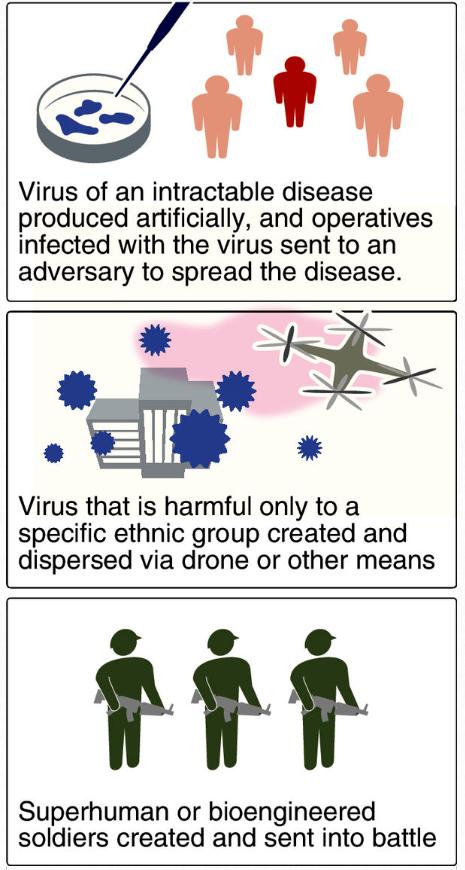 Since the end of World War II, the Defense Advanced Research Project Agency (DARPA) of the U.S. Defense Department has consistently led the world in the development of military-use technologies. At present DARPA is putting particular effort into the development of leading-edge technology to protect society from the abuse of genome-editing technologies, which can modify genetic information.

“We are researching technology to block genome-editing attacks from an adversary, and the technology to retrieve genetic information that has been modified,” Prof. Nariyoshi Shinomiya of the National Defense Medical College, who visited DARPA in February this year, says he was told this by a senior official in charge of development. Over the past four years, approximately ¥7 billion of military funding is said to have been put into the work.

Behind this development is the fact that thanks to tremendous advances in genome-editing technologies in recent years, it has become easy to produce viruses artificially.

According to Shinomiya, there is a prevailing view among experts that it might be possible to produce a genome-editing virus and launch an attack that would modify the genetic sequence of people in a particular ethnic group.

A report compiled in March by the Institute for Future Engineering with a subsidy from the Foreign Ministry noted the possibility of an adversary creating a bioengineered soldier with superhuman abilities to carry out terror attacks as ordered.

The United States has been strongly aware that China, a country which is said to outmatch the United States in genome-editing technologies, is also promoting “military-civil fusion” as a national strategy.

“Advancements in life science that benefit our health, economy, and society also open up new avenues to actors who want to cause harm.”

The administration of U.S. President Donald Trump emphasized, in its National Security Strategy in 2017, the necessity of also tackling issues such as genome-editing technologies as matters of national security. In 2018, the administration drew up the “National Biodefense Strategy,” reinforcing efforts throughout the federal government to be prepared to cope with threats posed by infectious diseases and biological weapons.

In November 2018, China announced that a researcher there had created genetically modified twins by using genome-editing technologies on a fertilized egg, sending shockwaves around the world.

Atsushi Sunami, president of the Sasakawa Peace Foundation, said: “China has been rapidly advancing animal experiments by throwing enormous human resources into the effort. The United States has been increasingly concerned about it from the viewpoint of national security.”

Did the Wuhan Institute of Virology artificially produce a virus that was transmitted with relative ease in Europe and North America? This view has spread in the United States regarding the novel coronavirus outbreak. This can also be said to indicate U.S. wariness over China.

“We want to tie up with Japan.”

When Aiko Shimajiri, then minister of state for Okinawa and northern territories affairs, visited Washington in December 2015, an official related to medical tasks in the U.S. forces reportedly made this appeal to her delegation.

Envisaged were plans to build medical facilities, including a base for the research and development of new drugs, at a site vacated by U.S. forces in Okinawa Prefecture, and advance the sharing of medical information between Japan and the United States.

Research on cutting-edge drugs and vaccines is intimately connected with biological weapons technology, a typical example of so-called “dual use,” through which technologies can be used for both military and civilian purposes. For instance, the technology of producing a drug that is effective for people of a particular ethnic group can also lead to producing a toxin targeted at a specific ethnicity.

For these reasons, countries including the United States and China believe that to protect their people, they must research the most advanced life sciences.

Due to domestic circumstances in Japan, however, the plans failed to make headway.

One reason is that the Science Council of Japan, a leading organization of Japanese scientists, rejects scientific research for military purposes. This stems from the fact that Unit 731 of the former Imperial Japanese Army engaged in germ warfare and performed experiments on human beings, a history that still influences domestic affairs. Medical circles, in general, are reluctant to cooperate with the Defense Ministry.

An official related to the government said skeptically, “The atmosphere is such that they would not even allow medical research at the National Defense Medical College aimed at preparing to cope with bioterrorism.” An official related to the Defense Ministry also voiced alarm, saying, “As long as they consider any research that could lead to dual use to be taboo, our ability to protect the public will not be enhanced.”