TOKYO — Gov. Yuriko Koike said Wednesday asking restaurants and shops to close will be a “huge burden” for Tokyo’s finances as the city faces a second wave of coronavirus infections.

Koike made the remarks in an interview with the Nikkei Asian Review. Tokyo reported another 250 new infections on Wednesday, the 21st consecutive day that its daily count has reached above 100. Koike also said that Tokyo is mulling a new medical facility to deal solely with the resurgence of cases.

On April 11, shortly after the national government declared a state of emergency, Tokyo asked restaurants and shops to close and subsidized those that followed the guidance. It fully lifted the request on June 19.

“At first, we did not know much about the virus and groped in the dark [over how to curb the spread of the epidemic],” said Koike. “Due to the request, many shop owners faced financial difficulties and we had to provide subsidies twice.”

Those subsidies were a financial drain on the metropolitan government that had already spent around 95% of its 935 billion yen ($8.9 billion) reserves set aside for emergencies. 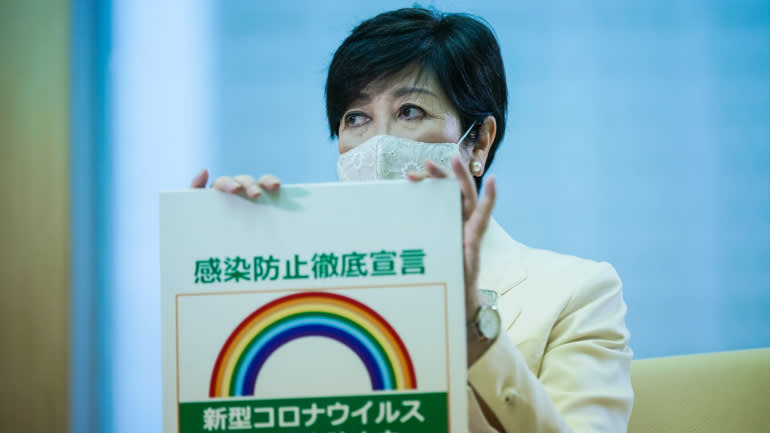 Asking businesses to close again will be a financial drain on Tokyo, Gov. Koike said on Wednesday. (Photo by Akira Kodaka)

Koike said asking businesses citywide to close again will lead to “a huge financial burden,” if Tokyo had to offer subsidies.

“We need a more strategic approach,” Koike said. This could mean that the Tokyo government may request specific sectors or areas to close, if the need arises.

Like cities across the world, Tokyo also wants to stimulate the economy and has encouraged residents to eat out, while bearing in mind social distancing and hygiene measures.

Koike is also considering doctors’ suggestions to build medical facilities that solely treat coronavirus patients. She said on Wednesday that it would be “effective” to secure such facilities to protect Japan’s medical system. She said the local government was mulling whether to build new COVID hospitals or to use existing ones, and the size of such facilities.

Koike said Tokyo will still host the Olympic Games next summer. “The metropolitan government is discussing items including simplification of the games,” said Koike. “Now, we have to focus on the countermeasures against the coronavirus, so as to welcome athletes and spectators as a host city next year.”