The polling results were released on Aug. 1.

Pacifism in the Constitution has taken root

While “Article 9” was the most frequently given response to the question of why Japan has not engaged in war since the Pacific War, the second most frequently given response was “because those who have experienced war or were impacted by the atomic bombings have shared the tragedies of war” (23%). Asked about the Self-Defense Forces (SDF), 76% said that Japan “should uphold its exclusively defensive posture” while only 17% said that “Article 9 of the Constitution should be revised to explicitly state the SDF is a military.” These findings suggest that the pacifism inscribed in the Constitution has taken root after soul-searching after the Pacific War.

Some 46% of respondents said that the Second Sino-Japanese War and the Pacific War were “wars of aggression.” A total of 84% said that Japan has either “adequately” or “somewhat” apologized to its neighbors. Pollees were split on whether the Japanese people need to reflect on Japan’s actions during the war and feel remorse, with 50% saying they do and 48% saying they do not. Among those in their 50s or younger, those who thought such a stance is not necessary exceeded those who thought it is necessary.

A plurality of 58% of respondents said that the prime minister “should visit” Yasukuni Shrine, while 37% said the prime minister should not. In the public opinion poll conducted by Kyodo News around the time of the 70th anniversary, the figures were 55% and 43%, respectively. Asked which facility is appropriate to honor the nation’s war dead, 47% said “Yasukuni as now,” an increase of 5 percentage points from the 39% found in the poll taken five years earlier. A total of 46% selected another of the choices given, including “Yasukuni if the class-A war criminals are enshrined elsewhere.”

Some 41% said that they learned about the Second Sino-Japanese War and Pacific War “from school studies and school textbooks.” Meanwhile, 23% said “from my parents or grandparents” and 22% said “from news reports.”

The poll was conducted in June and July of 3,000 men and women nationwide aged 18 or over. 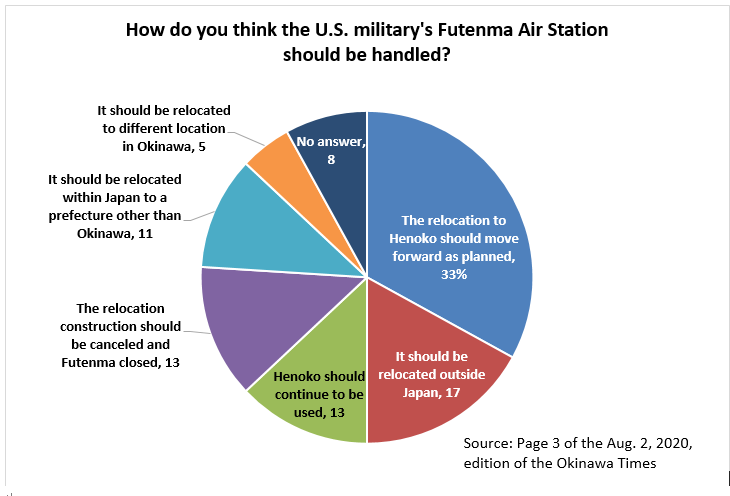 33% say that Henoko relocation “should move ahead”

Asked about the relocation of the U.S. military’s Futenma Air Station (Ginowan City) to the Henoko district of Nago City, 33% of respondents said that the “relocation construction should go ahead as planned.” A total of 46% do not want Futenma to continue to be used but selected a relocation site other than Henoko.

Futenma is said to be “the most dangerous U.S. military base in the world” because it is located in an area packed with houses and schools. It is indispensable for the base to be returned at an early date to ensure the safety of the area residents, but people are split on whether it should be relocated to Henoko.

72% say Japan should participate in the Nuclear Weapon Ban Treaty

Some 72% of respondents said that Japan “should participate” in the Nuclear Weapon Ban Treaty, which the United Nations adopted in July 2017. Of those, 62% said that Japan should join “because it is the only country subjected to atomic bombings during war.” Across all age groups, around 60% gave that response. This suggests that a wide range of age groups think that Japan should fulfill its responsibility in the international community as a nation that has been bombed.

The Japanese government has not joined the Nuclear Weapon Ban Treaty. The next most frequently given response as to why Japan should join the treaty was “because it will lead to the elimination of nuclear weapons” (32%).

[Polling methodology: A total of 3,000 men and women aged 18 or over were randomly selected nationwide from 250 locations on a stratified two-stage random-sampling basis to create a cross-section of Japan’s slightly more than 100 million voters. On June 22, questionnaires were sent out by postal mail, and 2,150 completed questionnaires had been returned as of July 27. Valid responses were received from 2,059 people, excluding questionnaires completed improperly or by persons other than the intended voter. The valid response rate was 68.6%. The makeup of the polling sample was as follows: male, 49.7%; female, 50.3%. Sections of Fukushima Prefecture heavily impacted by the 2011 Great East Japan Earthquake were excluded from the survey pool.