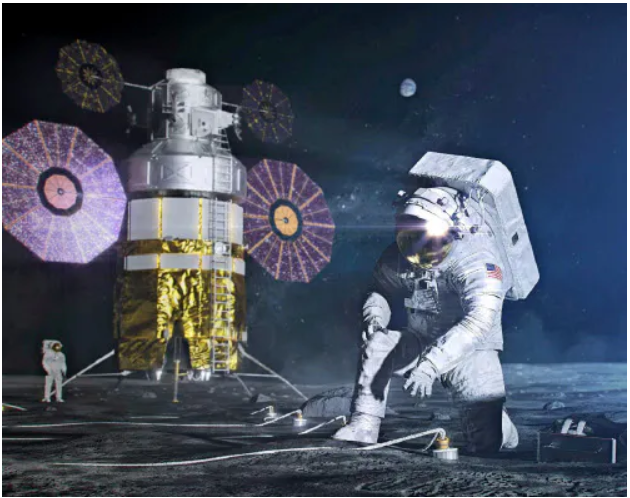 Japan will join U.S.-led exploration of the lunar surface. (Photo courtesy of NASA)

The joint statement declared with great fanfare that the U.S. and Japan will cooperate in the U.S.-led Artemis lunar probe project in a comprehensive way and sign an agreement to set forth opportunities for Japanese astronauts to engage in space activities. Buried in the agreement was a sentence with significance for resource development. The sentence says that the two countries “acknowledge the progress of discussions on the Artemis Accords.”

Reference to other than the moon

The National Aeronautics and Space Administration (NASA) announced the Artemis Accords in May and has been calling on nations participating in the Artemis project to sign them. The accords commit the parties to respecting the Outer Space Treaty, releasing scientific data, and protecting heritage sites of historic significance, including the Apollo mission landing spots. They also refer to resource development not only on the moon but also on asteroids and Mars, suggesting the notification of development sites and the establishment of “safety zones” to prevent interference.

The Outer Space Treaty adopted at the United Nations in 1966 gives countries the freedom to use and explore outer space and prohibits them from claiming sovereignty. But it has no provisions concerning drilling or possession of resources in space. The 1979 moon agreement bans the possession of resources by individuals and companies. But the agreement was ratified by only a dozen or so countries. Such advanced countries in space development as the U.S., China, and Russia did not join the agreement, so it has no practical binding effect.

The U.S. enacted a domestic law in 2015 to acknowledge the possession of space resources developed by individuals and companies in a bid to prompt companies to enter the space development industry. It appears that the U.S. is trying to take the lead in the creation of practical international rules by signing bilateral treaties with Japan, Europe, and other nations utilizing its overwhelming power.

Gakushuin University Professor Soichiro Kozuka, who is familiar with space law, says about bilateral agreements, “The creation of rules will work to the advantage of Japan and other countries that cannot use force.”

In the Artemis project, NASA has set a goal of landing male and female astronauts on the lunar surface in 2024 and continuously engaging in activities there. That will require securing water resources, which are necessary for keeping astronauts alive and expected to be utilized as an energy source. Many space startups aiming to land on the lunar surface see water resources development as a major business opportunity.

Furthermore, hopes are high that metals can be mined on asteroids in the future.

The creation of rules cannot be avoided in deciding to which country or company the right to develop resources should be given. Professor Kozuka says, “Feasible rules need to be created, such as giving the green light to credible plans in order of application.”

Opportunity for lawmaker-initiated legislation in Japan

Japan lags far behind the U.S. and China in lunar exploration but leads the world in asteroid exploration with its asteroid explorer Hayabusa2. Asteroids are expected to be the future source of water and metals after the moon. So the creation of international rules could be an opportunity to secure a dominate position.

Further, the enactment of domestic laws is needed to acknowledge the ownership of resources companies have mined for their use. A set of international rules and domestic laws will improve the environment for advancing the development of space resources. The U.S., Luxembourg, and some other countries have already enacted domestic laws. In Japan, the Liberal Democratic Party (LDP) is leading in preparations for enacting lawmaker-initiated legislation.

Currently, only countries that are participating in the project to construct the space station Gateway in lunar orbit have expressed their intention to join the Artemis project. But the Artemis Accords are intended to include many countries aiming to explore the moon other than just the participants in the Gateway construction. Bilateral treaties will enable the U.S. to slightly change some content according to the counterpart country.

China is significantly emerging in space development. The U.S. preceded China in space exploration, but how to involve China in the creation of international rules will become an important issue.