AIIB at crossroads amid COVID-19

BEIJING – The Asian Infrastructure Investment Bank (AIIB), which was launched as a China-led initiative in 2016, is at a crossroads. Its mainstay business of investment and lending to infrastructure projects has halted amid the spread of COVID-19. Now the AIIB is shifting to financial assistance for member states. The AIIB has more members than the Asian Development Bank, a rival institute led by Japan and the U.S., but much work needs to be done to improve its screening capability. Its operations could be eclipsed by escalating tensions between the U.S and China.

When the AIIB was launched, Japan and the U.S. had concerns that that Beijing might intend to turn the institute into a tool to back the country’s “One Belt One Road” economic initiative. But 39 out of 73 investment and lending projects approved by 2019 were undertaken jointly by the ADB and World Bank groups. The AIIB’s membership has increased to 103 from the initial 57, which is 1.5 times that of the ADB.

But the problem is that the AIIB’s investments and lending in 2019 totaled 4.5 billion dollars, only a fifth of ADB’s. To cut costs, the AIIB limits the number of staffers to around 350 and does not have offices outside China.

The AIIB has long focused on investment and lending, but the approach is beginning to undergo a sea change due to COVID-19. It has set up a credit line of $13 billion and approved 16 assistance projects, which totaled $6 billion, to help India, Indonesia, and other member states combat the pandemic. Since the construction work on infrastructure projects it has mainly financed is being suspended, it is shifting course to extend financial aid to member states to help them weather the crisis.

In an interview with the Asahi Shimbun on July 29, AIIB President Jin Liqun revealed plans to increase investments and lending to projects related to climate change and digitization, including a solar power project in Oman and an optic fiber construction in Cambodia.

Escalating tensions between the U.S. and China may cast a shadow on the AIIB’s prospects as well.

AIIB membership includes the U.K., Canada, and Australia, but their ties with China are deteriorating due to the U.S.-China conflict. India, which is AIIB’s largest aid recipient, is also seeing a worsening of ties with Beijing after a recent border spat. This may affect the AIIB’s investment and loan project with India down the road. (Abridged)

AIIB President Jin Liqun sat down with the Asahi for an exclusive interview and discussed AIIB’s future operations. Excerpts are as follows: 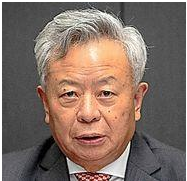 Q: How is COVID-19 affecting the AIIB’s operations?

Jin: I cannot deny the economic slowdown exerting pressure on us, but it is not having a huge impact. Though we may face difficulties in certain aspects, we are extending financial assistance to various countries to help operate the [infrastructure] projects there smoothly.

Q: Slightly over half of AIIB investments and lending made in the past years were co-financed by other institutes.

Jin: Plans are underway to increase our solo lending projects. We need to enhance our personnel’s capacity, too.

Q: How are you going to increase the numbers of workers and offices as you seek to expand lending?

Jin: In the future, we will need to set up offices in larger recipient states. But we want to operate with a smaller number of personnel. I personally don’t throw away paper if its flip side is not used. I do this for environmental reasons and to save costs.

Q: What is your focus in extending loans?

Jin: Climate change is our focus. In 2019, the area accounted for 39% of our total lending, but we will increase the percentage to 50% by 2025. We will also focus on the promotion of the digital economy and allocate half of our lending to the private sector. We will aim for a drastic increase in our lending to areas outside Asia from the current 15%.

Q: Will you be able to maintain a certain distance with the Chinese government and the One Belt One Road initiative?

Jin: We are operating under high international standards, and we are earning a good reputation as a result. We should not be drawn into any national disputes.