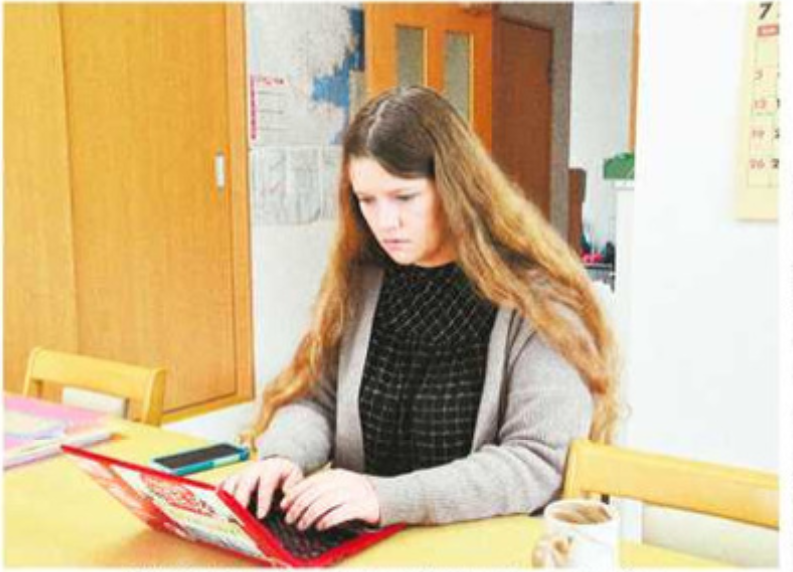 Kayleigh Ward analyzes survey results at the shared housing facility where she is staying.

Kayleigh Ward, a 26-year-old researcher at the Graduate School of Michigan State University in the U.S., is studying community development in the town of Minamisanriku in Miyagi Prefecture, which was hit by a tsunami during the Great East Japan Earthquake [in 2011]. The driving force behind her project is a desire for Minamisanriku to rebuild itself based on her own experience of disaster. She is looking for ways to increase solidarity across regional boundaries by focusing on post-disaster relations among residents.

Ward still clearly remembers the wildfires that hit her hometown of Ramona, California, in 2003 and 2007. Her house suffered no damage but “the repeated disasters deprived some people of their will to live,” she says.

Ramona is a rural town with a population of approximately 50,000. After the wildfires, the buildings and roads were restored, but some people left the town because they lost their houses or jobs. Meanwhile, land prices in the town plummeted, giving rise to increased numbers of immigrants. Ward recalls: “The income gap between town residents and immigrants prevented us from forging friendly relations with immigrants. The deep community bonds were fragmented.”

The two wildfires she experienced as a child led her to aspire to become a researcher. She majored in sociology at San Diego State University and learned how to rebuild communities. She visited Minamisanriku for the first time in 2014, when she was studying in Japan. She took part in the activities of a children’s support group and developed an emotional connection to the town.

“If I want to support residents, I need to engage with them every year in a responsible way,” she thought. She stayed in the town for about three months out of every year, volunteered to help farmers, and participated in an event organized by fishermen to deepen communication with local residents.

To focus on her research, she visited the town under the Fulbright Program in September last year and has continued living there even though the period of her study program expired in April. Minamisanriku had a population of some 17,600 before the 2011 disaster, but only about 12,500 people are living there now. Ward says, “My research is also aimed at examining whether improving relations among residents is effective in preventing depopulation.”

Ward will return to the U.S. in August and write a thesis based on her research results. “I don’t want Minamisanriku to become like Ramona,” she says. “I want to think about events and activities for residents to build new bonds across regional boundaries.”