Analysis of social media use in the Tokyo gubernatorial election: Nikkei and U. Tokyo

How is “online public opinion” born on social media and whose influence is greatest? Nikkei analyzed about 4.7 million Twitter posts on the July 2020 Tokyo gubernatorial election to examine the situation. The results were unexpected, showing that tweets of “experts” such as physicians and scholars were conspicuous on social media.

The analysis was jointly conducted with Tokyo University associate professor Fujio Toriumi and data analysis firm Hotto Link Inc. Japanese tweets between June 11 and July 5, 2020, containing key words related to the major candidates were selected and tweets that were retweeted more than 10 times were analyzed.

The analysis results showed that there were five major groups of users who had a big influence on online public opinion.

There were 278 groups of accounts that showed interest on similar tweets and had a similar pattern of information collection. These groups were called “communities.” The analysis team named the communities that had the five highest number of tweets, then analyzed the content of their tweets. 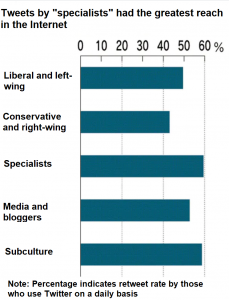 The community with the most active messaging was the “liberal and left-wing,” with the highest number of retweets at 1.09 million. Members of this community preferred topics such as anti-nuclear power and protection of the Constitution. An examination of frequently occurring phrases in their posts revealed that the community has a high level of interest in use of different last names by married couples and protection of the disadvantaged.

The “conservative and right-wing” community was the second most active. Its members preferred political comments and had a positive stance toward the right to collective self-defense. A segment of this community are the “netouyo (short for netto uyoku, or ‘net rightists’),” who advocate expulsion of foreigners.

The other three communities were “specialists,” whose members were those with areas of expertise such as university professors and physicians; “media and bloggers” comprising media outlets, bloggers, and their readers; and “subculture,” comprising music and movie fans.

Being retweeted many times will increase a tweet’s chances of being seen by many users. The number of retweets is often a barometer of the prominence an Internet voice. In an examination of retweet details, a large difference was found among each community in the number of retweets and the source of the original tweet.

For instance, 53% of “liberal” tweets were retweeted by a member of the same community. In the “conservative” community, this figure was 33%. In other communities, over 80% of the retweets were those from outside the community, showing the breath of their audiences.

How do the communities differ in their impact on the Internet overall? The analysis team calculated the proportion of tweets of each community that were retweeted by the 13.98 million Twitter users who use the app regularly. A higher retweet rate was interpreted as a greater influence.

The “specialists” community had the highest retweet rate, 59.4%. It can be said that this community’s tweets reached a bigger audience. People seemed to take interest in physicians’ views amid the coronavirus outbreak. Tweets, such as “the coronavirus is not the common cold” by an infectious disease scholar, drew users’ interest.

Some specialists posted messages outside their area of specialization. Takashi Taniguchi, whose tweets on analysis of companies’ finances attracts over 20,000 followers, says that when he “criticized the gubernatorial candidates, the response was better than usual” and this led to “more political tweets.”

Twenty percent of all “specialists'” retweets were originally tweeted by the “liberal and left-wing” community. This result points to the possibility that political viewpoints were spread online via the “specialists” and influenced voting activities of those such as unaffiliated voters.

The route of information transmission on the Internet has become more complex. On social media, it is easy to fall into an “echo chamber effect” where users see only those posts that express opinions similar to their own. It is important to listen to diverse opinions without being deceived by the avalanche of online information.