TOKYO — Japan on Wednesday began reopening its borders to tens of thousands of foreign residents locked out since April, as the government attempted to keep the coronavirus at bay. But after four months in limbo, some residents who have lived in Japan for years are questioning the wisdom of returning.

Arrivals beginning on Wednesday will still be limited to foreign residents who left Japan before entries from their country of origin were banned, officials said the same day. The first bans were issued April 3. Those who knowingly exited after the applicable date will have to wait longer, according to the ministry, which says about 90,000 are eligible, out of around 200,000 stranded overseas.

Foreign governments have been pressuring Japan, the only Group of Seven country to block permanent residents from reentering, for reciprocity for their citizens. Meanwhile, foreign residents who have remained on Japanese shores have faced the constant fear of an emergency that would require them to leave, with no guarantee of being able to come back.

Technically, Japanese citizens have been able to leave and reenter throughout the crisis, even when the country was under a state of emergency in April and May. “I’m not sure we’ve received any explanation for why a foreign resident is a greater risk than a Japanese national entering Japan,” said Christopher LaFleur, president of the American Chamber of Commerce in Japan.

The stranding of foreign executives, educators, engineers, and laborers has affected businesses and universities. It has also overshadowed Japan’s attempts to court foreign talent leaving hostile political situations in the U.S., Europe and Hong Kong, in an effort to remake Tokyo into Asia’s international hub. Nikkei reported earlier this week that the entry ban figured into The New York Times’ decision to relocate its Asia print hub to Seoul over Tokyo.

“I can’t think of a more unfortunate time for Japan to create doubts in the international business community,” said LaFleur. “If you’re a foreign company looking at Japan as a base for your business, this is going to be a significant deterrent because there is clearly discrimination.”

In a survey by the European Business Council in Japan, 86% of over 300 member companies said they were burdened by the entry ban, with 44% expecting a loss in revenue. 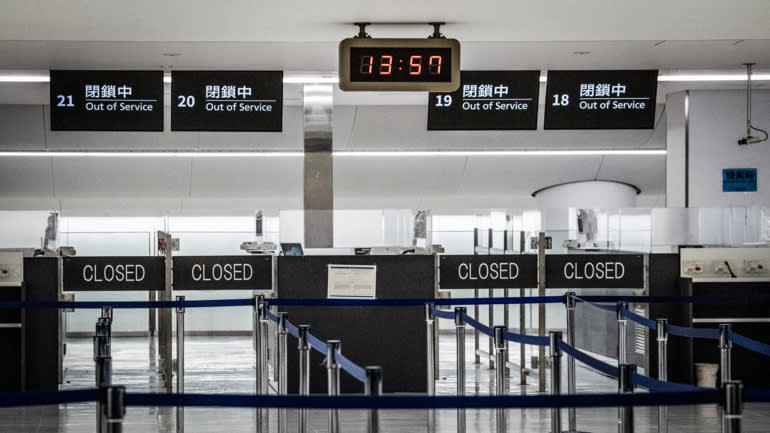 Closed immigration checkpoints at Narita Airport, near Tokyo, in April: Japan is the only Group of Seven country that blocked permanent residents from reentering.   © Getty Images

The burden has also fallen on Japanese companies seeking to collaborate with or recruit foreigners. An English conversation school hired Hannah Bradley, an American who received her partial immigration papers at the end of March, a day before the government announced it would bar arrivals from countries hit hard by the pandemic — the U.S. included.

Desperate to reunite with her partner, a Japanese citizen, Bradley considered flying from the U.S. to spend the 14-day quarantine period in a third country like Mexico or Papua New Guinea. But as the number of restricted countries on the website of Japan’s Ministry of Foreign Affairs rose to 146, she watched her options vanish.

Japanese educators have also voiced concerns about the entry ban and the halted issuance of visas to foreign students and researchers. “The progress of joint research has been greatly affected,” the Japan Association of National Universities wrote to the minister of education in July.

For early and midcareer academics, the question is, “Do I want to stay and carry on my research career here if I’m going to be treated differently from Japanese researchers?” said Jenny Corbett, Rio Tinto Fellow at the Foundation for Australia-Japan Studies, which provides research grants.

“It’s the pipeline of younger people that you risk losing,” she added.

Universities have asked the government to include research travel in its list of activities exempted from the entry restrictions, since Japanese researchers are able to come and go.

“No one is expecting to have special treatment but everyone wants to see equal treatment,” Corbett said.

Seemingly straightforward, the reentry process implemented on Wednesday presents several hitches. Regardless of nationality, travelers will be required to take a coronavirus test in their country of origin within 72 hours of departure, and obtain a confirmation letter certifying the test from a Japanese Embassy. Upon arrival, they will be expected to take another test at their port of entry and spend two weeks in self-isolation.

Asked at a Wednesday afternoon briefing how long it takes to receive the confirmation letters, a foreign ministry representative said that it depends on the embassy, but that there have been no reports of staff being overwhelmed.

As things stand, different testing capabilities in other countries could put some returnees at a disadvantage. In the U.S., testing availability varies between cities and states, but it uniformly takes days to receive results. Japan’s foreign ministry website recommends traveling to a third country if tests are unavailable in a resident’s home country, but coronavirus travel restrictions worldwide make the suggestion moot.

“Availability of testing is going to be a bottleneck for residents returning from the U.S.,” said LaFleur. People line up outside a Japan Immigration Service Agency center on May 26. While some residents have been stranded outside the country, others have felt unable to leave, fearing they would not be able to return. (Photo by Kai Fujii)

Waiving the double testing requirement for returnees from countries with better testing capacity could help make the process more equitable. A resident flying from Germany, for example, would not have to be tested at a Japanese airport, freeing up test kits for U.S. returnees.

“The Japanese government needs to talk to the German government and recognize the tests performed in Germany,” said Michael Mroczek, president of the European Business Council.

The entry ban issue has betrayed a lack of coordination between Japan’s government ministries as well. The foreign minister has been fielding complaints from other countries’ embassies, but the call is ultimately up to the Ministry of Justice, which oversees immigration, and the Ministry of Health, which can recognize foreign coronavirus tests.

International business groups have been making the case to the influential Ministry of Economy, Trade and Industry that the entry ban hurts domestic companies as much as non-Japanese ones.

A Japanese company that manages cable cars in Yokohama and Nagano faces a deadline in the fall to install new connectors, which can be done only by engineers from Switzerland. The maintenance of Japan’s famous bullet trains also hinges on the reentry of Austrian engineers.

The situation could open Japan to disputes based on international treaties it has signed. Mroczek, a lawyer, pointed to the International Covenant on Civil and Political Rights, which guarantees the right to leave and reenter for citizens and residents alike.

Japan’s free trade agreements could also land it as a respondent in an international dispute. Its pact with Switzerland, in particular, guarantees the “fair and equitable treatment” of investments by Swiss and Japanese companies and individuals.

“Assuming that the managers here in Japan have resident status and are not allowed to come back, this would be an unreasonable measure impairing the management of the investment,” said Mroczek.

Even without litigation, “the longer this ban continues, it will be cause for businesses to reconsider their presence in Japan,” said Emily Hallams, executive director of the Australia-New Zealand Chamber of Commerce in Japan.

Faustine, a French student at Tokyo’s Sophia University, chose to study in Japan because she found its universities more international than the ones at home. Despite finding Japan a convenient place to live for over three years, she is reconsidering staying long-term because of the government’s unreliability when the going gets tough.

“When you’re living in a country that you consider your home, and you pay taxes and contribute to the economy, it’s frustrating that you can’t count on the government for support,” she said. “We just want to go home.”