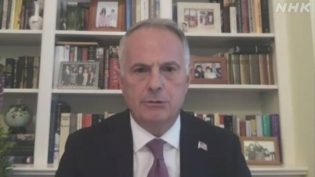 NHK reported this morning that Kenneth Weinstein, who has been nominated as the next U.S. Ambassador to Japan by President Trump, underwent his Senate confirmation hearing on Wednesday. The network said the U.S. Ambassador-nominee stated that he will urge Japan to shoulder more responsibility in order to respond to the serious security threat to Northeast Asia posed by China’s military buildup. He was shown saying: “We are doing more; Japan needs to do more. Prime Minister Abe understands this. He understands this well. Japan has certainly significantly increased its purchases of U.S. military equipment. I am optimistic that we will come to some sort of a fruitful conclusion for the host nation support negotiation.” The network said that if the appointment is approved by the Senate, Weinstein will arrive in Japan to replace former Ambassador Hagerty who resigned to run for the Senate.