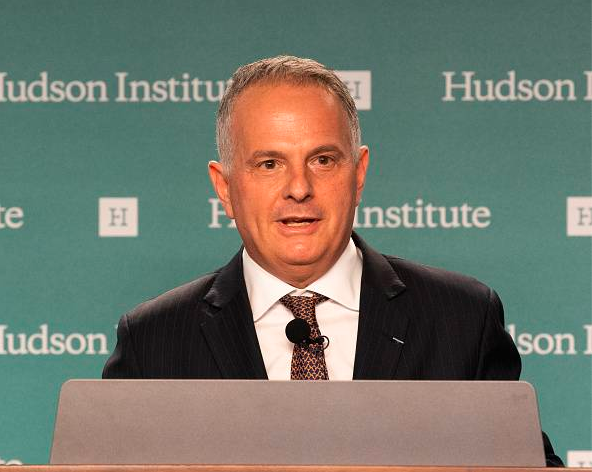 OSAKA – The nominee for U.S. ambassador to Japan, Kenneth Weinstein, said Wednesday that Washington will ask Tokyo to assume a larger role in its alliance in order to counter China’s growing influence in the region.

This will include pressure for Japan to increase its defense capabilities, Weinstein told the Senate Committee on Foreign Relations, adding that he would encourage Japan to push forward to complete the relocation of Marine Corps Air Station Futenma in Okinawa Prefecture to a location within the main island off Nago, which is now decades behind schedule.
“As ambassador, I’d seek to stress the importance of the (U.S.-Japan) alliance, stress the people-to-people exchanges, not that we all need to do more. We need to make the case that we are doing more and Japan needs to do more,” Weinstein told the committee.
Weinstein is president and chief executive officer of the Hudson Institute, a conservative Washington-based think tank. The institute takes a hard-line stance on China, viewing the Indo-Pacific region countries as a critical bulwark in global efforts to compete with the country. The think tank is particularly critical of Beijing’s Belt and Road initiative and what it says is the forcing of huge debt burdens on partner countries. Weinstein also serves on the organization’s Advisory Committee on Trade Policy and Negotiations, which provides counsel on trade agreements to the U.S. Trade Representative.
Under Weinstein, one area the Hudson Institute addressed in 2019 was the abduction issue involving North Korea’s past kidnappings of Japanese, a topic he said it had a long history of addressing and was of profound importance. At a seminar in May 2019 co-sponsored by the institute, Weinstein met with five Diet members as well as family members of the abductees.
Striking a tough tone against China, Weinstein, who is said to have a close relationship with Prime Minister Shinzo Abe, warned that as Beijing’s military capabilities and technological prowess increase, destabilizing actions by China in the Indo-Pacific region and globally are likely to grow as well.
“Beijing’s unlawful maritime claims, disruptive behavior toward neighboring countries and efforts to strong-arm neighbors — many of which are U.S. allies or close partners — and challenges to the liberal, rules-based order need to be called out and countered,” Weinstein said in a prepared statement.
He noted that over the past eight years, Japan has increased its defense spending and strengthened and modernized its defense capabilities in several areas, including investment in new intelligence, surveillance and reconnaissance technologies. As ambassador, Weinstein said, he would encourage that Japan further strengthen those capabilities and shoulder greater responsibility within the alliance.
Asked about the long-delayed relocation of the Futenma air base in Okinawa to the northern part of the main island, where a replacement facility is under construction at Henoko, Weinstein said he would work with Japan to complete the project. This would be as part of the increased effort by Japan he is encouraging, especially given Okinawa’s proximity to the Senkaku Islands, which are claimed by China, where they are known as the Diaoyu.
“The burden (of U.S. bases in Japan) falls disproportionately on Okinawa. But as we engage in this strategic competition in the Indo-Pacific, all of us need to do more. We’ve seen China’s increased aggressiveness around the Senkaku Islands, where for over 100 days they’ve been sending vessels into territory administered by Japan.”
Weinstein also said that North Korea’s nuclear weapons program is a challenge requiring especially careful vigilance, and that both negotiations with, and boosting defense capabilities against, the North are needed.
“The Japanese have been clear they have no interest in developing nuclear weapons whatsoever. But the danger of proliferation to other powers in the region is a possibility. That requires us to continue our engagement with North Korea but to also be absolutely firm about boosting our missile defense, and working together with Japan, South Korea and our other allies,” he said.
On trade and development issues, Weinstein said that as part of efforts to counter the Belt and Road initiative, he would work for continued and expanded cooperation between Japan and Australia to identify, advance and certify infrastructure projects in the Indo-Pacific region.
These would, he said, offer a transparent alternative to the opaque lending terms and unsustainable debt burdens inherent to the Belt and Road initiative, with the goal of showing developing countries in the region there is a healthier alternative to the Chinese project.
The post of U.S. ambassador to Japan has been vacant since William Hagerty stepped down in July 2019 to run for the Senate.
In Tokyo on Thursday, Chief Cabinet Yoshihide Suga declined to comment on Weinstein’s remarks, saying Japan is making its own fundamental efforts toward strengthening its self-defense system through peace and security legislation, as well as a review of its defense guidelines. But he echoed some of Weinstein’s comments about freedom in the region.
“While continuing to further strengthen the Japan-U.S. alliance, the cornerstone of Japan’s diplomatic security, we will work closely with the aim of realizing a free and open Indo-Pacific region,” Suga said.