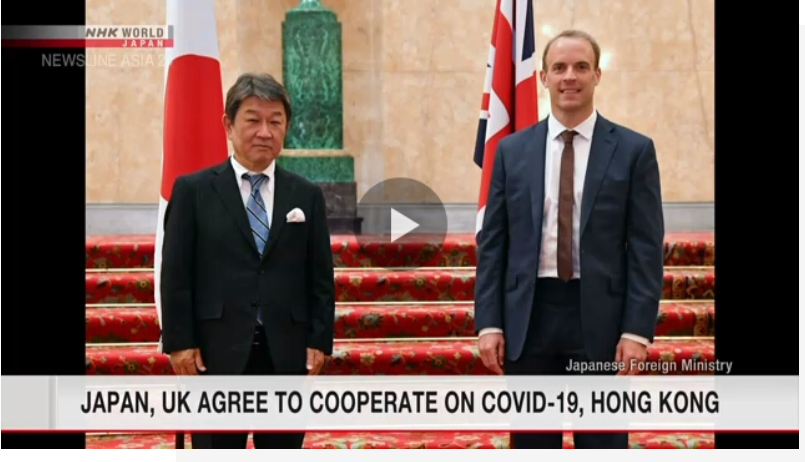 The foreign chiefs of Japan and Britain have agreed to work together to respond to the coronavirus and the situation in Hong Kong.

Motegi said he wants to strengthen ties between the two countries on a wide range of issues, including COVID-19. Motegi and Raab confirmed that the two countries will work closely to help set up an international framework for the distribution of vaccines and medicines.

They also agreed to stand side by side in making sure that freedom and the rights of residents, people of any nationality, and businesses are respected in Hong Kong.

Motegi and Raab expressed concern about the decision to postpone Hong Kong’s Legislative Council elections by one year.

They also agree to further promote security cooperation against the backdrop of China’s intensifying military activities in the South China Sea and around the region. The two sides said officials will arrange the early holding of a so-called “two-plus-two” meeting that would include their defense ministers. The talks had been postponed.

Motegi said negotiations on a bilateral trade agreement should be speeded up with the aim of signing a deal within the year. Raab expressed support for Motegi’s idea.

Raab later said in a statement, “Our meeting here in London follows on from positive discussions in Tokyo earlier this year, and on both occasions we found significant common ground.” He added, “Whether it’s our collective response to COVID-19, cyber security, climate change, or support for freedom in Hong Kong, the UK and Japan stand side by side, and I look forward to an even closer partnership in future.”

Motegi is the first Japanese cabinet member to travel abroad in about six months, as ministers are refraining from making overseas trips due to the coronavirus pandemic.