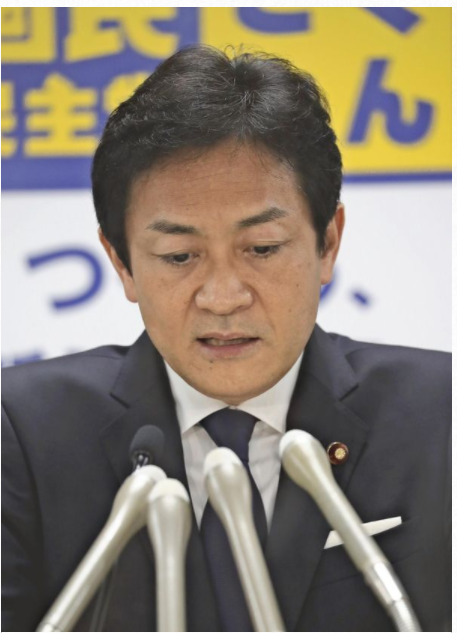 Yomiuri Shimbun file photo / Yuichiro Tamaki, president of the Democtatic Party for the People speaks at a press conference in Tokyo on Tuesday.

More members of the soon-to-split Democratic Party for the People plan to participate in a merger with fellow opposition party the Constitutional Democratic Party of Japan than the remaining members that will form a new party, according to a Yomiuri Shimbun survey.

The survey asked the DPFP’s 62 lawmakers — 40 in the House of Representatives, 22 in the House of Councillors — about their intentions following leader Yuichiro Tamaki’s announcement this week that the party would split due to disagreement over whether it should merge with the CDPJ. About 80% replied to the survey.

Fifteen members (13 in the lower house, two in the upper house), including former Internal Affairs and Communications Minister Kazuhiro Haraguchi, indicated they would join a merger with the CDPJ.

However, eight members (five in the lower chamber, three in the upper), including lower house lawmaker Shiori Yamao, said they would join a rejigged DPFP. According to the survey, 26 lawmakers — 13 from each Diet chamber — said they had not decided, but many of the upper house members indicated they would make a final decision based on factors including the preference of the Japanese Trade Union Confederation, or Rengo, which is their support organization.

The newly merged party will include the CDPJ’s 56 lower house and 33 upper house members. A group of about 20 independent lower house lawmakers whose leaders include former Prime Minister Yoshihiko Noda are also expected to join the party, so the focus of attention will shift to whether the party can top 100 lawmakers in the lower chamber.

Some members of the ruling Liberal Democratic Party are hopeful lawmakers sticking with the slimmed-down DPFP will work closely with the main ruling party, as they seek cooperation on policy issues such as discussions on constitutional revision.

“The DPFP is close to the LDP on some matters such as the Constitution, economic policy and diplomatic policy,” former Defense Minister Gen Nakatani, an LDP member, said to reporters Wednesday. “It’ll be interesting to see which members join that party and what its basic policies will be.”

A senior LDP official said the same day that the reformed DPFP “would probably help to accelerate discussions on the Constitution.” The official told reporters that seeking ways for the parties to cooperate was a necessity.

Discussions on amending the top law made barely any progress during the ordinary Diet session that ended in June. The House of Representatives Commission on the Constitution held a free discussion only once during the latest Diet session. This was largely because many lawmakers from the CDPJ, the largest opposition party, are reluctant to hold talks on the top law, and the party is cool toward holding meetings at the commission.

However, Tamaki has previously insisted talks at the commission “should move forward.” Consequently, a veteran LDP member said the ruling party, which is eager to advance these discussions, should cooperate with the pro-revision Nippon Ishin no Kai party and the new DPFP to be comprised of lawmakers who refuse to merge with the CDPJ.

“We want to open up the prospect of revising the top law,” the veteran member said.

Tamaki has not given a clear indication of whether he would be willing to work with the LDP and Nippon Ishin. “That’s undecided because the party hasn’t been formed yet,” Tamaki said at a press conference Tuesday.

Given that the DPFP has sought to position itself as a “reform-minded centrist party,” aiming at proposing policy, some elements inside the LDP expect that party might cooperate on bills over which the ruling and opposition parties are at loggerheads.

“If even some of the opposition parties agree with our policies, that would dilute the impression that the government and ruling parties bulldozed bills through the Diet,” a senior LDP official said. “If such a party continued to cooperate with us, depending on the situation, we might offer cooperation in elections, form a coalition or they could participate in the government from outside the Cabinet.”