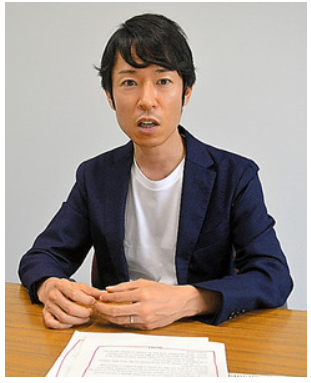 In mid-July, I visited Shingo Yoshida, a 38-year-old associate professor at Kindai University in Osaka. He studies how the Japan-U.S. alliance has deepened in keeping with the changes in the international situation. The Ministry of Foreign Affairs (MOFA) recently accepted my request and disclosed minutes prepared around the time that the meetings of the Security Sub-Committee (SSC) began in 1967. Yoshida is also well-versed in affairs of that time.

Of all the disclosed documents, the one that stood out was a document titled “missile and air defense of Japan” compiled in 1968. The document provides a U.S. calculation that “China’s nuclear attack on Japan will instantly kill 18 million people in the worst-case scenario.” Yoshida seemed to be deeply impressed by the document, saying, “I’ve never thought this document would be released to the public.” He added, “This document is in line with the Japan-U.S. security relations of the 1960s, a period when the U.S. was trying to calm Japan, which was growing anxious about China’s nuclear weapons.*

Why was the SSC created in the first place? The committee was comprised of such distinguished people as a U.S. ambassador to Japan, senior officials of the U.S. Department of State and the U.S. Department of Defense, the commander of the U.S. Forces in Japan, Japanese foreign and defense vice ministers, and the chairman of the Joint Staff Council, who is the top uniformed Self-Defense Forces (SDF) officer.

Yoshida says: “The nuclear test China conducted in 1964 had a major impact. Eisaku Sato, who became the prime minister immediately after the test, became increasingly wary of China, and the U.S. administration under President Lyndon Johnson exercised vigilance against Japan possibly becoming armed with nuclear weapons.

During the 1965 summit, Tokyo and Washington confirmed that the U.S.’s “nuclear umbrella” protects Japan. But both sides continued to harbor reservations. Meanwhile, China was developing missiles capable of reaching Japan amid the Great Cultural Revolution.

Then came the U.S.’s decision to introduce the ABM missile defense system. Unlike today’s missile defense system, the ABM is a nuclear weapon that neutralizes an enemy missile by means of a nuclear explosion. The military wanted to guard against the Soviet Union amid the Cold War, and the Department of Defense insisted that possessing [the ABM] would not work for the Soviet Union as it had already acquired a large amount of nuclear weapons. The two parties made a compromise and announced a plan to introduce a “light” ABM system in preparation against China in 1967.

But Yoshida says: “The U.S. was worried that if it took measures in preparation against China, Japan would become uneasy about the U.S. nuclear umbrella and turn to the acquisition of nuclear armaments. It also had lingering concerns about Japan’s nationalism buoyed by economic growth.”

The SSC became a place for assuaging such mutual anxiety. The U.S. first explained to Japan its plan to domestically deploy the ABM and presented an estimate showing that deploying the ABM in Japan would reduce the number of victims in a Chinese nuclear attack by three to six million.*

Yoshida, who has the U.S.-drafted minutes of the SSC disclosed by the U.S. government, also touched on the remarks made by Japanese participants, which cannot be found in the MOFA minutes. According to the U.S. minutes, senior MOFA officials showed interest in the ABM deployment to Japan, despite the ABM being a nuclear weapon, because it was intended for the purpose of defense. They made such statements as “We’ll be pressured by the public to deploy it” and “Is it effective?”

A newspaper from that time carried remarks made by “a high ranking MOFA official” to prompt discussions on the possession of “defensive nuclear weapons.” Yoshida says: “The Sato government was considering familiarizing the nuclear-averse Japanese public to nuclear weapons by publicizing the necessity of the use of nuclear weapons for national defense. The ABM may have been used to gauge the reaction of the public.”

The plan to deploy the ABM to Japan fell through due partly to Sato’s announcement at the end of 1967 of the “three non-nuclear principles” aimed at having Okinawa returned “nuclear free.” The return of Okinawa is widely known as a major topic of the Japan-U.S. talks back then, but Yoshida sticks to the Chinese nuclear issue. He says: “Studies on the Japan-U.S. alliance cover the base issue but not strategy coordination. I want to fill that gap.”

But discussions on such controversial themes, especially nuclear topics, will not be promoted because MOFA does not disclose documents compiled even about a half a century ago. Yoshida says: “The public tends to be divided into pacifists and hard-liners and the government is unable to present a realism where diplomacy and military policies are combined to resolve the issue. This makes it hard for foreign countries to understand Japan. I think this structure will continue to remain in place.”