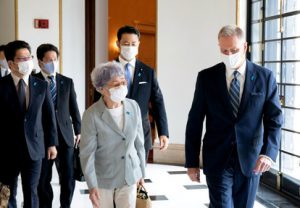 All national dailies other than Asahi wrote that Chargé d’Affaires Young met with Sakie Yokota, the mother of abductee Megumi Yokota, and her family at the Ambassador’s Residence in Tokyo on Tuesday. The papers wrote that Sakie and Megumi’s twin brothers Takuya and Tetsuya expressed appreciation for the letters of condolence they received from President Trump and Chargé Young over the death of Megumi’s father Shigeru in June. Sakie reportedly told the press afterward that the Chargé listened to them very carefully and that she will continue stressing the importance of the abduction and other human rights issues in cooperation with foreign nations. Yomiuri quoted Takuya as telling reporters:” “We were encouraged by Chargé Young’s statement that the United States will continue to stand with us.” Mainichi wrote that according to the Yokota family, Chargé Young told them that the United States will continue to support efforts to resolve the abduction issue as soon as possible.

NHK also reported on the meeting between Charge d’Affaires Young and the Yokota family, saying that the meeting gave her hope and that she will call for bringing the abductees home in cooperation with people from various countries.