TOKYO — Was it a failure or a message?

When a North Korean ballistic missile promptly exploded about 71 km above the ground on April 29, 2017, many dismissed the test launch as a failure.

But some experts in Japan and the U.S. wondered whether it was an ominous message that Pyongyang would play dirty if need be.

A nuclear explosion at a high altitude, where the air is very thin, would produce an electromagnetic wave strong enough to fry devices on the ground and satellites up in space. The April 29 missile detonated in the ionosphere, where such a blast could wreak the most havoc.

The balance of power in East Asia has shifted significantly since, as North Korea rapidly advances its missile program with help from Russia and other actors and as China pours more resources to hone its technology. The rising stakes have pushed the U.S.further into pace to build stronger satellite networks that its advanced defense systems depend on.

The Japanese government had long ignored those changes, likely so it could move ahead with the now-suspended procurement of the Aegis Ashore missile shield from the U.S. The system, like other existing U.S. defenses, is designed for ballistic missiles on a parabolic trajectory, and is completely ineffective in the face of new missile technology. North Korea launches a Hywasong-12 intermediate missile on Aug. 29, 2017. Some experts believe the rockets may be more than just an option for attacking targets on the ground.   © AP

The nature of potential threats has changed as well. U.S. and Japanese forces grapple with the possibility that a hostile country could load hundreds of cheap drones with explosives and launch them toward military targets from ships disguised as civilian vessels. Even a multimillion-dollar Patriot missile would be toothless against such an attack.

The Chinese military has aggressively expanded its capabilities in recent years. In addition to procuring new aircraft carrier groups, stealth fighters and thousands of ballistic missiles, the country has succeeded in deploying supersonic missiles ahead of the U.S. Large-scale drone attacks, which can be launched without a massive budget, are also moving closer to becoming reality.

In response to rising threats, the U.S. has launched the Joint All-Domain Command and Control, or JADC2, initiative to modernize its forces. Eventually, the idea is to have unmanned fighter jets launching off unmanned carriers, or for an artificial intelligence-powered system to select the best fighters or carriers in an area and order defensive missile strikes.

The initiative relies heavily on satellite communications. If American military satellites were to be attacked, U.S. forces plan to retaliate against enemy satellites and immediately launch replacement probes to maintain the advantage in space. 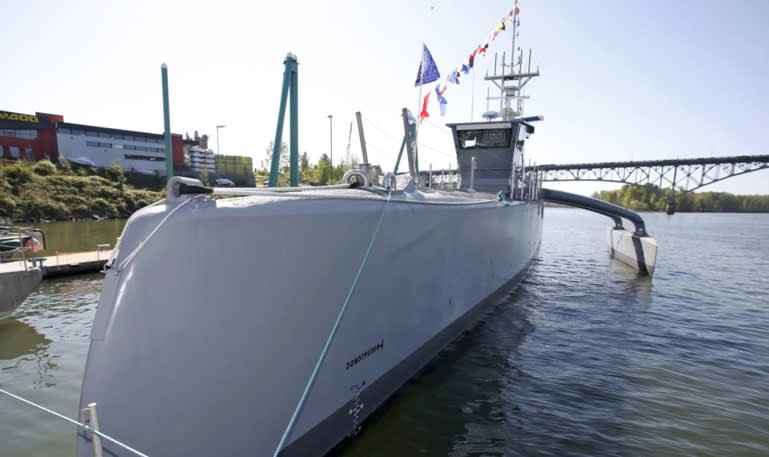 The autonomous ship “Sea Hunter” is part of the U.S. military’s push into unmanned weapons.   © Reuters

The U.S. Space Force, the nation’s sixth military branch launched in December, announced in July that Russia had conducted an anti-satellite test — demonstrating its surveillance prowess.

Military technology will only continue advancing, from space weapons to AI-powered drones. But nobody knows the extent of destruction that could be caused by these cutting-edge weapons in actual war.

The Cold War was the product of mutually-assured destruction, with the U.S. and the Soviet Union both refraining from attacking the other and triggering what would surely be their own annihilation. The world faces the dawn of a new Cold War with even higher stakes, as technological advancements make it even easier for countries to wipe each other out with the push of a button.