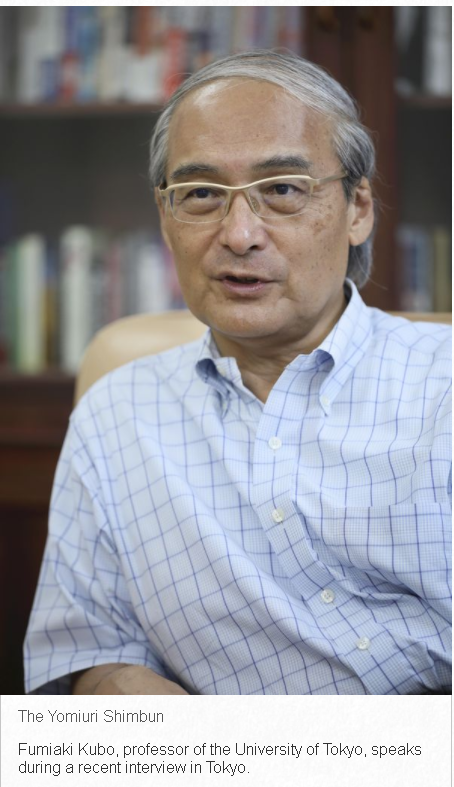 The novel coronavirus pandemic may change the global order. While the United States, with by far the largest number of cases, faces a presidential election in November, China, which seems more successful in containing the infection, has accelerated in gaining global influence. The following is an excerpt of an interview by The Yomiuri Shimbun with Prof. Fumiaki Kubo of the University of Tokyo, an expert in modern U.S. government.

China will definitely serve as a cause of major turmoil in a post-pandemic world order. It dares to squarely challenge the current world order and possesses a reasonable amount of power to change it.

On the other hand, U.S. public opinion, which had long supported the post-WWII world order, is now turning inward with more priority on domestic matters.

Moreover, the idea of the United States making sacrifices in a bid to control China’s actions is no longer well accepted by the American public. Under such circumstances, can it convince its own people that it can exercise the same level of leadership as before?

Following the outbreak of the coronavirus, the United States, European countries and Japan are experiencing considerable negative economic growth and increasing budget deficits.

Questions have arisen over whether they will be able to aid countries in Latin America, the Middle East and Africa that could go bankrupt as a result of a further spread of virus infections.

Furthermore, this ongoing pandemic has highlighted concerns that the World Health Organization (WHO) failed to function adequately as a neutral, fair international organization out of consideration for China.

China has been maneuvering to change the structures and policies of international organizations in its favor by such tactics as acquiring the top positions of some international bodies and supporting top officials who would make favorable decisions to Beijing. It has been blatantly using them with its abundant financial power to this end.

The United States, on the other hand, has announced its withdrawal from the WHO, which U.S. President Donald Trump described as “a puppet of China.”

While distrust toward the WHO is mounting in Washington, Beijing will only likely boost its influence within the body.

How China handled the outbreak has helped spread its image as a nation with a secretive political culture. Subsequently, the national security law came into force in Hong Kong to crack down on anti-government movements. This has firmly fixed the negative reputation of Beijing’s culture.

The country has been attempting, by force, to change the status quo in and around the Senkaku Islands and the South China Sea, and such actions have also drawn fierce criticism.

In particular, Washington’s view of Beijing has entered a different phase. U.S. Secretary of State Mike Pompeo in July announced a shift from the longstanding “engagement strategy” that sought to integrate China into the international community.

The hard-line stance on China, which is part of Trump’s reelection strategy, has also spread within the Democratic Party.

However, as Joe Biden, former U.S. vice president and the Democratic nominee for the November presidential election, is so keen to draw in the party’s left wing, he may not necessarily follow the same hard-line stance toward China as Trump, even if he is elected.

China’s economy is three times the size of Japan’s, while its military spending is four times Japan’s defense expenditure. Japan is facing such a country and is actually being challenged by it in and around the Senkaku Islands. Perhaps for the first time, Japan is in a situation where it cannot be certain that it will be able to defend its territories.

If Japan gives an overly welcoming treatment to Chinese President Xi Jinping as a state guest when China’s behavior around the Senkaku Islands remains unchanged, would it not send the wrong message to Beijing? Nevertheless, Prime Minister Shinzo Abe should also continue direct dialogue with Xi in a bid to solve the problem.

During the years of the Cold War between the United States and the Soviet Union, exports of products with significant security implications to the Soviet Union were banned by the Coordinating Committee for Export Control (COCOM). With the escalating conflict between Washington and Beijing, there is a good chance that a system similar to that may return globally.

This is an issue that could cause blowback for Japan’s security. Japan also needs to heighten its vigilance in regard to cutting-edge technology, to which Washington is becoming increasingly sensitive.