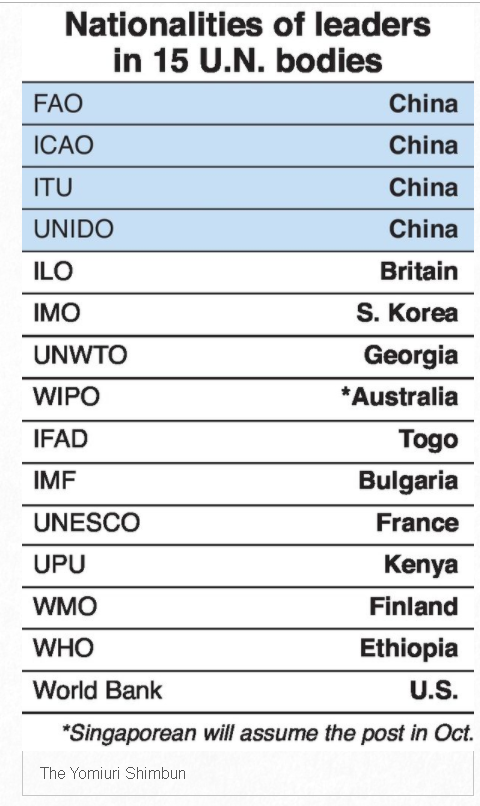 To increase the number of Japanese in head posts at 15 important United Nations institutes, the government has decided to centralize personnel planning under the Cabinet Bureau of Personnel Affairs.

The goal is to discover a wide range of candidates from Kasumigaseki in an effort spear-headed by the Prime Minister’s Office.

The government wants to push back against China, which has gained influence with a number of top postings recently.

Currently, when Japan wants to propose candidates for key positions at international bodies, the selection process is mainly conducted by the Foreign Ministry.

However, ministries and agencies are loath to let go of promising officials, which can stagnate coordination.

The Cabinet Bureau of Personnel Affairs was established in 2014 to centrally manage executive personnel at the ministries and agencies.

The government has decided it should also oversee personnel selection for international organizations as a way to work across ministry and agency lines. A specialist may be appointed to the bureau to handle this area, sources said.

The government’s focus on personnel appointments at international bodies comes in response to China’s rising influence.

With one of its citizens at the helm, a nation can see its interests reflected in how an organization is run, which can put it at an advantage when creating international rules and standards.

However, there are currently no Japanese leading any of the 15 key institutions.

In 2006, Shigeru Omi ran for director general of the World Health Organization (WHO), but lost to China’s candidate, Margaret Chan, who is from Hong Kong.

Omi is now chairman of the government’s working group on responding to the new coronavirus.

With elections scheduled next year for organizations including ICAO, UNIDO, and UNESCO, Liberal Democratic Party members and others have been calling on the government to strengthen its system.

The government also plans to focus on gathering information from overseas to help its goal of winning top appointments for Japanese citizens.

The bureau intends to establish a framework for obtaining advice from the National Security Secretariat’s economic team on issues such as developments in countries expected to nominate competing candidates.

Votes by U.N. member states require a flexible approach, such as by forming a united front with the West or supporting other countries.

In the World Intellectual Property Organization (WIPO) leadership election in March, Japan took back its candidate and worked with the United States and Europe to block the Chinese nominee and help elect a candidate from Singapore.