TOKYO — Fintech companies are overtaking global financial institutions in both earnings and market capitalization in the April-June quarter, as the coronavirus accelerates trends toward a cashless society.

“In the midst of the COVID pandemic, we have seen substantial macro changes that we believe will have a lasting and profoundly positive impact on our business,” said PayPal Holdings CEO Dan Schulman at the company’s earnings call on July 29.

“The world has accelerated from physical to digital across multiple industries, including retail.”

PayPal’s net profit jumped 86% on the year to a record $1.53 billion in the second quarter. With the online shopping market growing amid the pandemic, its payment services soared 30%. 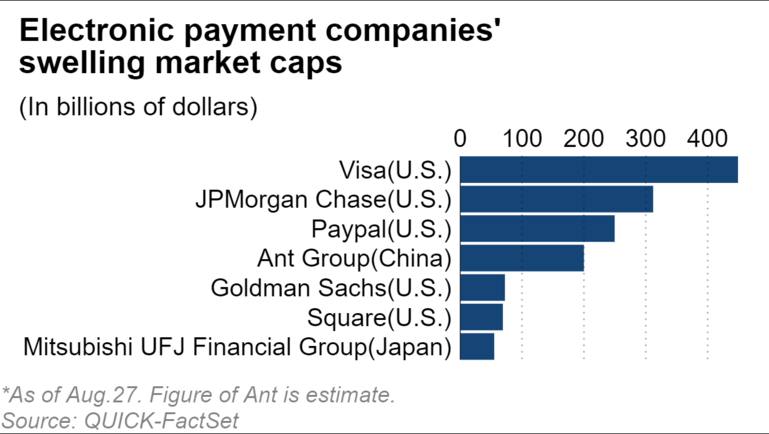 Fintech profit levels are almost on par with major financial groups. PayPal’s profit surpassed that of Citigroup, while Ant Group is about the same as Credit Suisse. And valuations are much bigger than those of banks. PayPal’s $240 billion valuation is about 80% more than the combined valuation of Japan’s three megabanks, which stands at about $130 billion.

Ant Group is planning an initial public offering that would carry a valuation of $200 billion, ultimately making it comparable to the $220 billion market cap of Bank of America, the second-largest bank in the U.S. Among other payment providers, U.S. credit card company Visa saw profits plunge 23% in the April-June quarter, as credit card usage declined due to sluggish spending. But company earnings have been bolstered by rising online payments.

U.S. company Square, which obtained a banking license in March, posted a loss in the second quarter. The company has grown rapidly by offering mom-and-pop retailers and other small businesses easy credit card payment solutions via smartphones. It plans to establish a bank next year. The company is valued at around $67 billion, surpassing Japan’s Mitsubishi UFJ Financial Group.

Digital response was also key to solid second-quarter earnings at some commercial and investment banks. Goldman Sachs was one, with operating revenues in the bond and stock market units posting record profits since the 2008-2009 global financial crisis.

Goldman’s Marquee electronic trading platform enabled customers to trade stocks and bonds and manage risks at home even amid the pandemic. The company won a record number of external contracts in April, but overall profit declined due to corruption-related reserves.

Although over 90% of Morgan Stanley employees worked from home in the second quarter, the U.S. bank logged a record profit. Companies that engage in trading in the U.S., including Japan’s Nomura Holdings, all posted solid results.

In the U.S., the Federal Reserve’s electronic systems “enabled me to participate in U.S. Treasury auctions from home and remote work didn’t interrupt my trading,” said an executive at a leading Japanese brokerage.

Japan, on the other hand, does not have a system that allows remote trading in Japanese bond auctions and the Bank of Japan’s open-market operations. This means Japanese traders must trek to offices to work.

According to QUICK FactSet, daily trading volume on the Tokyo Stock Exchange declined in the April-June quarter from the previous quarter, while volume increased in New York and London, where lockdowns were stricter than in Japan.