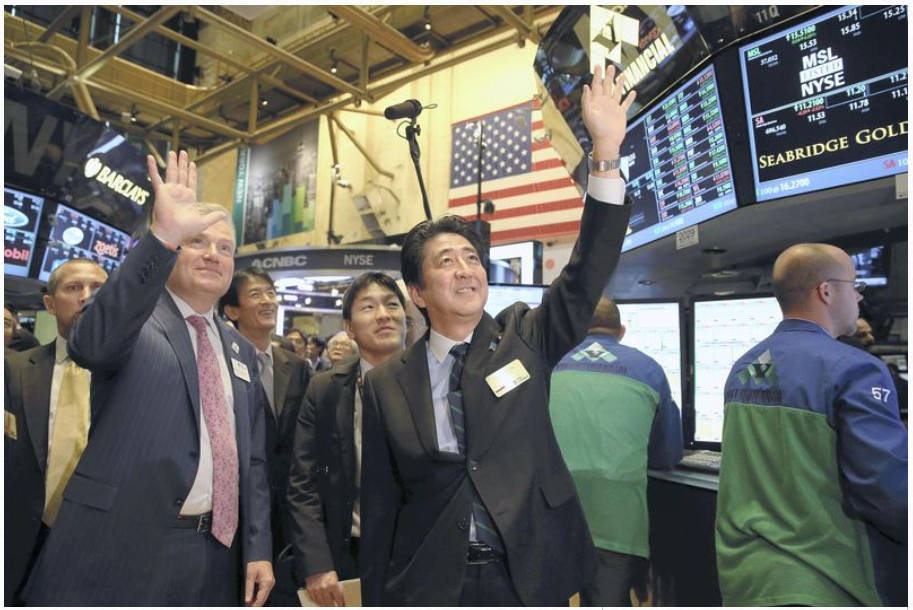 Pool photo / The Yomiuri Shimbun / Prime Minister Shinzo Abe visits the New York Stock Exchange in 2013. He urged investors to more actively invest in Japan with the phrase, “Buy my Abenomics,” during his speech at the NYSE.

They say management requires “decisiveness” and “empathy.” The same is probably true for the administration responsible for steering the Japanese economy.

Abenomics confronted the economic stagnation of the Heisei era with what were then unusual policies — extraordinary monetary easing by the Bank of Japan, massive fiscal stimulus and the Trans-Pacific Partnership trade deal, which ended up launching without the United States.

These policies, which started out thanks to the strong determination of Prime Minister Shinzo Abe, swept criticisms aside, doubled stock prices and improved the employment situation.

The unemployment rate dropped to the 2% range. Companies were freed from the “six hardships” of the Democratic Party of Japan’s time in power, including a strong yen and high corporate tax rate. Japanese firms logged record-high profits two years in a row.

Yet Abe was dogged by criticism that many people were not feeling the benefits of the economic recovery due to stagnating wages and widening disparities.

Corporations, although posting stellar financial results, have not seen increased satisfaction from their customers, employees, business partners and others.

Economist Adam Smith, in his first book “The Theory of Moral Sentiments” (1759), wrote that empathy, not merely self-interest, was the prerequisite for free competition. Human beings have something inside them that makes them feel happy to see the happiness of others.

Ikujiro Nonaka, a professor emeritus at Hitotsubashi University, and his coauthor wrote in “Kyokan Keiei” (“Empathy management,” published by Nikkei Business Publications Inc.) that “the power of empathy becomes a source of drive and propulsion that helps to attain goals that cannot be described by analysis alone.”

Policy as well should be allowed to have an impact only when it resonates with the people who will enjoy it.

Abenomics lacked empathy. This was a negative aspect brought about by initiatives led by the Prime Minister’s Office that supported the long-lasting administration.

In “Shippai no Honshitsu” (“Essence of failure,” published by Chuokoron-Shinsha, Inc.), a study of the organizational theory of the Japanese military’s failure in World War II, Nonaka and others pointed out that elite military staff stayed far from the front lines and would not incorporate the views of people on the ground.

With a handful of bureaucrats and others running the administration, the primacy of the Prime Minister’s Office may have meant the people’s voices got through less and less as time went on.

A strong Prime Minister’s Office has deprived the Finance Ministry of its function of coordinating policy. Although this helped eliminate rigid fiscal management, it seemed to turn the ministry into a “budget and accounting ministry” that merely calculated the cost of policies decided by a Prime Minister’s Office guided by the Economy, Trade and Industry Ministry.

Generally, it is important that economic policies become sharp and balanced through a screening process, but with the administration’s goal being to improve economic indicators, supplementary budgets were drawn up year after year. As a result, the amount outstanding of government bonds has reached ¥1 quadrillion. This is supported by monetary easing by the BOJ, which has been unable to come up with an exit strategy.

Facing the novel coronavirus crisis, with its calls for self-restraint that have evaporated demand, both financial leeway and the unity of ministries have been lost.

The companies that failed to make use of the tailwind created by Abenomics are also responsible. Internal reserves have grown to ¥460 trillion, of which ¥220 trillion is sitting dormant as cash on hand. They should have released their “animal spirits,” in the words of economist John Maynard Keynes, to use this money for new investments and to increase wages.

The coronavirus threat and increasing digitization may be part of what economist Joseph Schumpeter described as “creative destruction.”

Now is the time for the government and the private sector to work together with empathy.