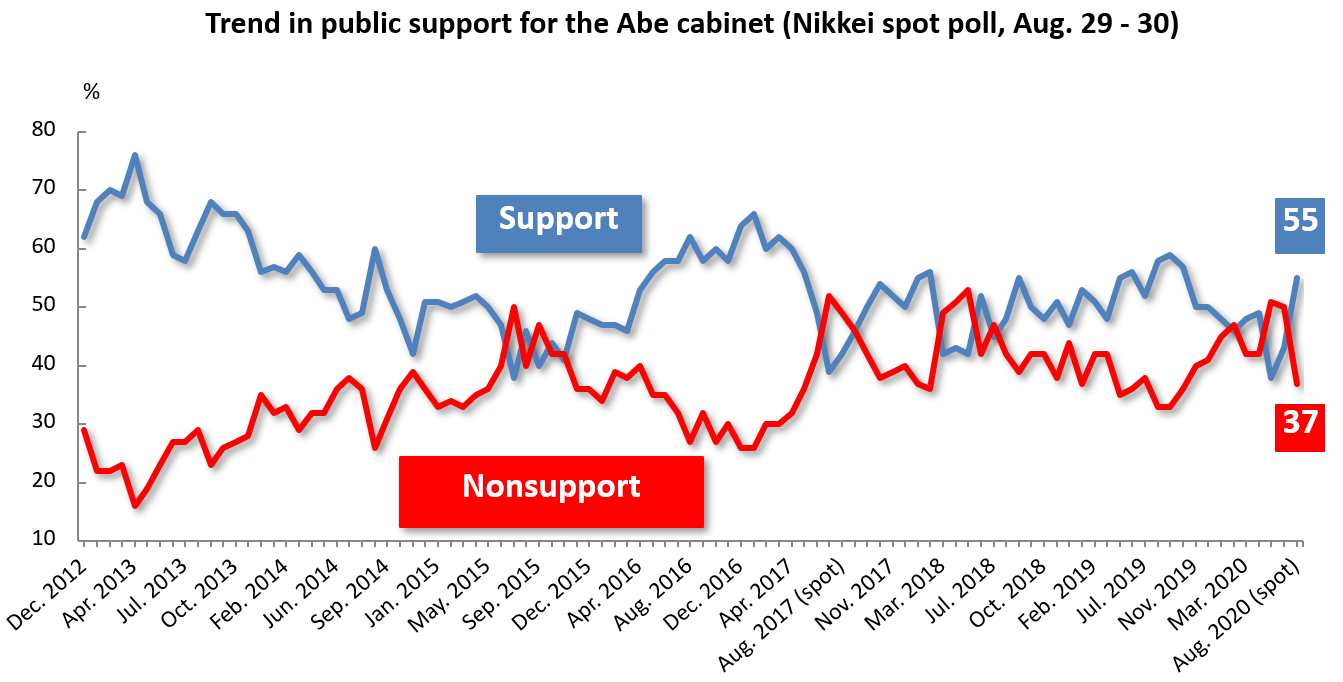 The Nikkei nationwide public opinion poll conducted on Aug. 29–30 probed views on which of Prime Minister Shinzo Abe’s policies respondents would like to see the next prime minister continue to implement (multiple responses permitted). A total of 44% said “coronavirus countermeasures,” making it the most frequently given response. Tied for least frequently given response were “constitutional amendment” and “political and administrative reform” with only 13% of pollees selecting these responses from the eight choices provided. It is thought that coronavirus countermeasures were selected by many respondents because they think highly of the fact that Japan has few deaths from the virus compared with Western countries. It also could be true that many pollees selected coronavirus measures because they think they should be continued as a priority policy issue.

At his Aug. 28 press conference, Prime Minister Abe once again indicated the intention to expand Japan’s testing capabilities, saying that the testing framework is insufficient. The new prime minister needs to strengthen coronavirus countermeasures right after he or she takes office.

The next most frequently given response was “economic policies” at 38%. After returning to the premiership, Prime Minister Abe posted 71 months of economic recovery under his package of policies known as “Abenomics,” closing in on the postwar record set by the “Izanami boom” of 2002 to 2008. The economy has cooled because of the new coronavirus, and the recent poll findings seem to reflect hopes for the continuation of policies that boost the economy through proactive government spending and monetary easing.

By age group, “coronavirus countermeasures” was the most frequently given response among those age 39 or under and among those age 60 or over. A full 42% of those in their 40s and 50s, however, chose “economic policies,” outdistancing those in this age group that selected “coronavirus countermeasures.” Looking at the findings by occupation, 40% of students said they wanted the next prime minister to continue Abe’s economic policies.

A high 33% of respondents want the next premier to continue “diplomatic and security policies.” Backed by strong Japan-U.S. ties, which Abe strengthened through his personal relationship with U.S. President Donald Trump, PM Abe has engaged in diplomacy that counters the rise of China.

The Abe cabinet support rate was 55%, up 12 percentage points from the July poll. This is Abe’s highest support rate since October 2019. It is also the highest support rate of any administration in the past 20 years in its last public opinion poll, although no direct comparison can be made because polling methodologies have differed.

The nonsupport rate was 37%, down 13 points. This is the first time in three months that cabinet support has exceeded nonsupport.

Some 88% of respondents said that Prime Minister Abe’s decision to step down due to health concerns was “appropriate.” Only 8% said it was not appropriate.

[Polling methodology: The nationwide poll was conducted on Aug. 29–30 by Nikkei Research Inc. via random-digit dialing (RDD) to both landlines and mobile phones. It drew 778 responses from those 18 and older, for a response rate of 48.3%.]