Teardown of DJI drone reveals secrets of its competitive pricing

TOKYO/GUANGZHOU — With drones finding their way into aerial photography, crop spraying and many other applications, China’s DJI Technology has combined cost competitiveness and advanced technology to become the world’s biggest manufacturer of unmanned flying machines.

DJI, which holds an estimated 70% of the global market, produces drones at half the cost of rivals by using an array of off-the-shelf parts. Disassembling one of its latest models reveals that it is composed of 80% commodity parts by value.

Although Chinese drone makers are expanding, helped by strong domestic demand, their future growth is clouded by the increasing friction between the U.S. and China.

The DJI Agras, a large drone measuring more than 1 meter across, recently took to the air, its motor whining, over a farm in Kaiping, in southern China.

Drones are an increasingly common sight on farms. In China and elsewhere, DJI machines were used to plant or spray crops over a total of 270,000 sq. kilometers, equal to 70% of Japan’s land area.

The farmland in Kaiping is fertile, but a good yield depends on controlling insects. Drones are a valuable weapon in the fight against pests: They can cover 50 to 60 times more ground than a human in a given period of time.

Founded in 2006, DJI has grown quickly. It has offices in the U.S., Japan and three other countries outside China, and its annual revenue has grown to 18 billion yuan ($261 billion).

Nikkei, together with Tokyo-based research specialist Fomalhaut Techno Solutions, conducted a teardown of the Mavic Air 2, DJI’s newest lower-end model which is priced at about $750. Disassembly revealed that the vehicle, by estimate, is made of components worth around $135. 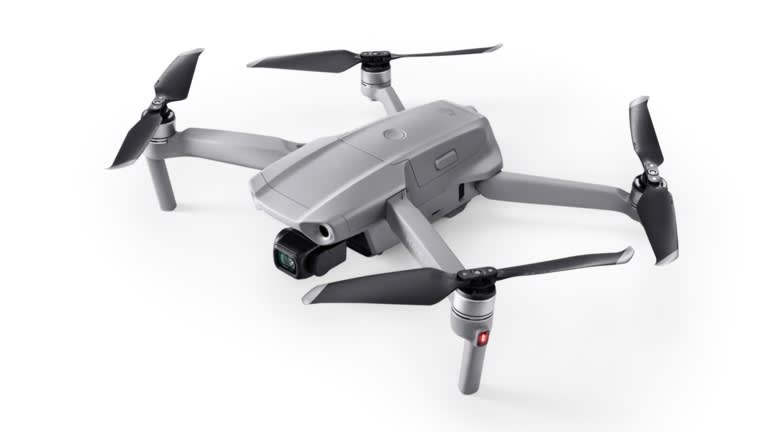 DJI’s Mavic Air 2 is the drone maker’s latest lower-end model. The series ranges from industrial machines to those aimed at hobbyists. (Photo courtesy of DJI)

The cost of components for the model, at around 20% of the retail price, is less than the 30% to 35% typical for smartphones. “It would cost us twice as much in materials alone as the price of the [DJI] to make a product with the same capabilities,” said an executive with a Japanese drone maker.

Many of the parts that give DJI drones their functionality are found in smartphones and personal computers. Such parts account for about 80% of the 230 components used in the Mavic Air 2. The camera has components found in a premium smartphone; the GPS receiver is made from parts found in smartwatches.

“The semiconductors that control the propellers are the sole exclusive parts,” said a Fomalhaut official. “Expensive parts costing more than $10 are limited to the battery, the camera and a few others.”

But the Mavic Air 2 is sophisticated despite its modest price. It can shoot ultra high-definition 4K video, automatically track objects and avoid obstacles.

In Japan, the drone can be maneuvered by the pilot from up to 6 km away and send video five times farther than rivals. It is designed to be lightweight, weighing in at just 570 grams. The motherboard of the Mavic Air 2 is about 10 cm by 4 cm and is packed with 10 large and small chips. DJI drones also have advanced software that has been upgraded with each successive model, and they come out frequently. The company has drastically improved its flight-control technology over the past three years and is now much more sophisticated, according to a Japanese drone developer.

According to Patent Result, a Tokyo-based company that analyzes patents, DJI had 185 of them in force in Japan as of January last year, a testament to its advanced technology. It is one of the biggest among patent holders in the business in Japan, with more than three times as many as its nearest competitor.

Although the strengths of DJI and other Chinese manufacturers have helped China’s drone industry leap ahead, trade friction between Washington and Beijing could dim their prospects.

“DJI may become like Huawei,” said Fumiaki Yamazaki, chief researcher at the Institute of Information Assurance for National Security Japan. The U.S. Department of Homeland Security has reported a possible leak of information involving DJI, and the U.S. military has begun limiting the use of drones made by the Chinese company, Yamazaki said.

While the Japanese government has held off from issuing a total ban on Chinese drones in its procurement, some organizations, such as the Japan Coast Guard, have stopped using them.

But given the trade friction, an executive at a major manufacturing company said: “We worry about relying solely on Chinese drones.”

The teardown of the Mavic Air 2 found many U.S.-made parts. The IC chips that control the battery, for example, are made by Texas Instruments, while those that amplify radio signals and eliminate noise are made by Qorvo. In the absence of alternatives, DJI may have a hard time sourcing key components if it is subjected to new U.S. trade restrictions.

The global market for drones is forecast to grow from $3.7 billion in 2018 to $103.7 billion by 2023, with Chinese manufacturers capturing half that value, according to U.S. researcher Frost & Sullivan.

Industry insiders around the world are waiting to see whether strong domestic demand can keep DJI airborne, or whether it becomes the latest casualty in the U.S.-China trade war.