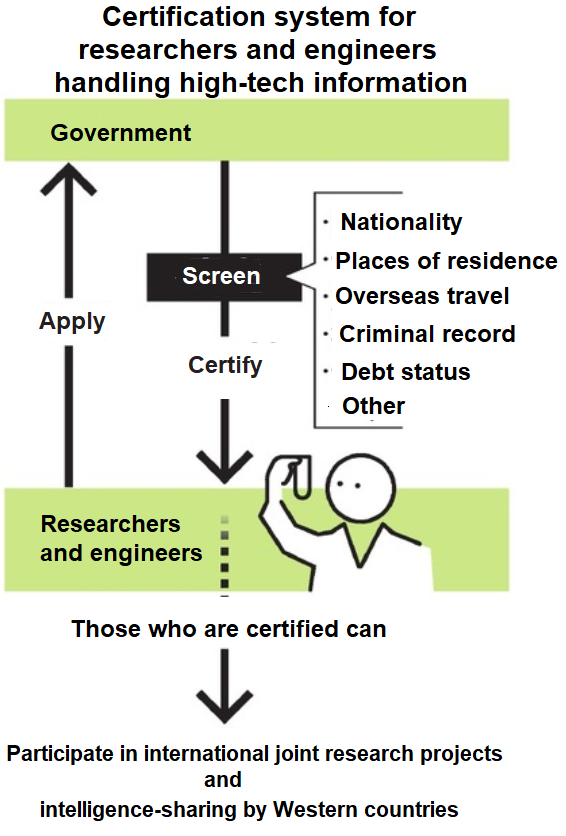 Japan is poised to set up a certification system to guarantee the trustworthiness of private-sector individuals handling state-of-the-art technology. The government will screen applicants and guarantee that those who pass can be trusted not to leak classified information. Certification will serve essentially as a government guarantee to the international community of the individual’s trustworthiness. The plan is to revise the science, technology and innovation revitalization act, which calls for strengthening Japan’s international competitiveness. Legislation will be drawn up for submission to the ordinary Diet session to be held next year, government sources said.

Australia and all members of the Group of Seven, except Japan, already have this kind of certification system. As America’s struggle with China for hegemony heats up, the U.S. government is increasingly demanding that technology leakage be prevented in advanced technological areas, such as artificial intelligence (AI), quantum computers, and robotics. “Under future international joint research projects led by the United States, participation will not be possible unless an individual is certified,” a high-ranking Japanese government official said.

Registration for the 2018 and 2019 annual symposiums on weapons of mass destruction at the U.S. National War College was limited to personnel who possessed a security clearance of at least “Secret,” which is the second level in the U.S. three-tiered system. The Liberal Democratic Party’s Special Mission Committee on IT Strategy released findings in 2017 that said the absence of a certification system in Japan meant “there was information regarding cyberattacks that was not being shared with Japanese companies and a huge information differential had emerged between Japan and Western nations regarding the volume of information that can be accessed for R&D.”

Under the new system, university researchers and company engineers will submit applications, and the central government will evaluate applicants’ trustworthiness by looking at their backgrounds based on international standards. In Western nations, it is common to make an overall assessment by looking at the applicant’s nationality, overseas travel history, and criminal record among other things. Officials in the National Security Secretariat’s economic team will join hands with representatives of the Cabinet Office and other related government ministries and agencies to hammer out the specific items that will be used in Japan’s evaluation process.

The government decision to engage in a full-fledged study on setting up a certification system was prompted by growing concerns in the U.S. and other countries about China. A think tank affiliated with the Australian government issued a report in 2018 that said 2,500 engineers working for tech research institutions linked to China’s People’s Liberation Army were involved in joint research projects with foreign universities and companies after concealing their true affiliation, and were sending back information on advanced technology to the Chinese army.

Toshifumi Kokubun, an economic security professor at Tama Graduate School of Business, comments: “Not having a certification system for private-sector individuals will lead directly to a drop in the nation’s industrial competitiveness. Japanese companies and research institutions still do not even realize the need for such a system. The government should hurry with legal revisions and press the private sector to change its way of thinking.”

The Act on the Protection of Specially Designated Secrets came into force in Japan at the end of 2014, requiring civil servants and private-sector individuals to obtain clearance before they can handle information classified as state secrets. However, only the four areas related to security (defense, foreign affairs, the prevention of terrorist activities, and the prevention of espionage and the like) are designated as secrets in that law.

The fields designated as “state secrets” could have been broadened to cover the sectors in the new certification system. The public continues to be uncomfortable with the state secrets law, however, so the government elected to completely separate the new certification framework from it. The government seeks to set up a system that exclusively guarantees the trustworthiness of private-sector individuals, rather than to relate the system to the handling of state secrets as in the West. As a high-ranking official at the Cabinet Secretariat says, “It will be a unique system unlike those in other countries.”

The basic premise is that applications will be received from researchers, engineers, and other individuals. As a government source highlights, “The matter of seeking certification will be left up to the will of the individual, rather than be something required by the government.”

It is hard to tell how much demand there will be for this certification in Japan. In the U.S., about 4.8 million people, including government employees, have a security clearance as of 2016.

In the operation of the system, thorough measures will be taken to prevent the use of personal data outside the intended usage. The system is also expected to have a way for those denied certification to lodge an appeal.