TOKYO — Ahmad Wani, the CEO of One Concern, a startup that uses artificial intelligence to gauge what kind of damage a disaster might leave behind, founded his company in California, no stranger to wildfires, earthquakes and other natural disasters.

But One Concern now finds itself as part of a trend in which U.S. startups with disaster-mitigating technologies are coming to Japan to prove themselves.

While Japan is not known for wildfires, it does get more than its fair share of expressway-toppling earthquakes, nuclear-reactor-destroying tsunamis and airport-isolating typhoons. As such, solutions that prove able to mitigate disasters in Japan are likely to be accepted elsewhere in the world, Wani explained.

One Concern’s AI does not work alone. It sniffs through real-time meteorological, topographic and other data sets in an effort to guard against the ever more costly natural disasters that the world is experiencing.

Disaster-mitigation efforts in Japan have so far relied on hazard maps drawn by government experts based on past data. But unyielding rainstorms, supertyphoons and other natural disasters have become more frequent and ruinous due to global warming and other factors. Past data alone is no longer enough to handle mitigation planning.

One Concern recently obtained an additional investment of $15 million from Sompo Holdings, Wani said in an online interview with Nikkei. One Concern will use the money to develop its technologies and expand its operations in Japan, Wani said. 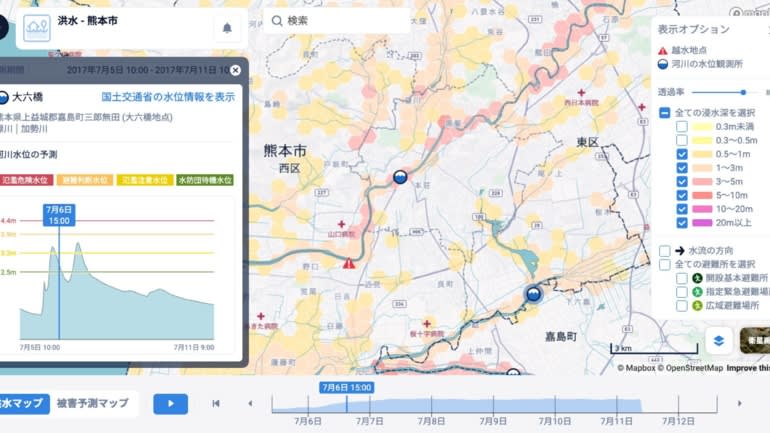 Sompo Holdings and One Concern use meteorological data and artificial intelligence to assess how much damage future disasters might leave. (This image chart is different from an actual damage prediction.)

Founded by earthquake engineering, AI and other experts at Stanford University in 2015, One Concern’s AI takes in more than 100 data sets of disaster-caused developments before predicting what kind of damage can be expected area by area should another disaster strike.

The service can help corporations maintain their operations through a disaster, or it can be used by local governments as they design anti-disaster programs. It has been adopted by the local government of San Francisco and other bodies.

One Concern has raised $75 million to date. In 2019, it first partnered with Sompo Japan Insurance, subsidiary of Sompo Holdings, to push into the Asian country. In July, it began operating a model that predicts river flooding in Kumamoto city.

Wani now intends to expand One Concern’s experimental operations outside of Kumamoto.

Another American startup in the field is Zesty.ai, which applies AI to meteorological and satellite data to calculate the probability of hurricanes and floods. Taking geographical data and materials of buildings into account as well, the company makes real-time disaster risk predictions.

Through an alliance with top American life insurer MetLife, Zesty in 2018 raised $13 million, only three years after it was established.

U.S. research company CB Insights put Zesty on its list of the world’s 100 most promising startups. Zesty CEO Attila Toth says his company’s business model will be based on selling climate risk solutions.

Descartes Labs has developed software that can detect a wildfire within minutes. The program uses AI to analyze images from the U.S. government’s climate satellites every few minutes and find fractional changes in smoke and infrared ray data. The software and satellite imagery allows the startup to predict where a fire will occur and how far it will expand, according to the company. 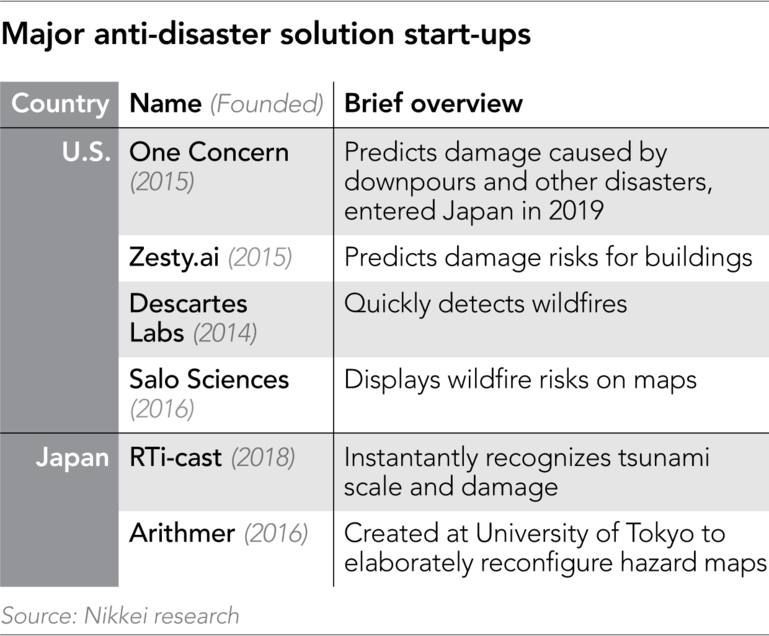 Japan has its own anti-disaster startups. RTi-cast began at Tohoku University, in Sendai, Miyagi Prefecture. Its supercomputer-based system analyzes the scale and velocity of tsunami waves and, when an earthquake occurs, predicts what kind of impact it will have and the damage it will leave.

Capable of instantaneously sending information to local governments, the system was adopted by the Cabinet Office in 2018.

The natural disasters that struck the world from 2010 through 2019 created $2.98 trillion worth of economic losses, up 66% from the preceding decade, according to Aon Group, a leading British provider of insurance mediation services.

The escalating frequency of natural disasters is putting countries and regions into fiscal binds and is becoming adversarial to economic activity.

Steve Bowen, an Aon director and meteorologist, said disaster risks can be mitigated by public and private efforts that seek science-based solutions.

Big American and Japanese companies like Google, IBM and NTT have entered the market for anti-disaster solutions and are improving their technologies.

But technological innovations in the sector are coming much more slowly than those in manufacturing, mobile, e-commerce and other industries. It is rare for new services to be created because of a paucity of opportunities involving consumers and due to competition between businesses.

If more companies enter the sector and rev up the cycle of technological innovation, they might find themselves feeding a much larger market.