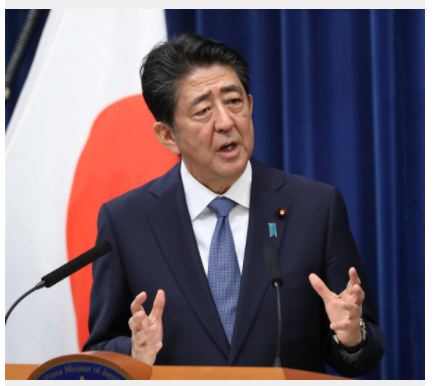 Prime Minister Shinzo Abe expresses his intention to resign during a press conference at the Prime Minister’s Office on Aug. 28. (Photo by Ataru Haruna)

Prime Minister Shinzo Abe announced his intention to step down due to the worsening of his chronic illness. The announcement came just after he had set a record as the longest-serving prime minister in the nation’s history. But he decided to resign to avoid roiling national politics.

The biggest achievement of Abe is that he brought political stability. When Japan was still reeling from the collapse of Lehman Brothers and the Great East Japan Earthquake, he garnered strong support from the public, which was disappointed by political turmoil involving a change of prime minister almost every year.

The Liberal Democratic Party (LDP) led by Abe won every national election since his return to power in December 2012. The opposition bloc bitterly criticized Abe’s political stance, saying he was solely dominating the political scene. But it was voters who had provided him with the source of his strength.

The Sankei Shimbun made a request, saying: “Japan is in the midst of the new coronavirus outbreak. We want the LDP to swiftly carry out a presidential election and select a new leader to minimize political turmoil.” The paper also showed its appreciation for Abe and wrote: “There is no doubt that he used all of his strength to engage in state affairs while coping with a serious disease. We want him to concentrate on getting better and recuperate to make a comeback.”

The Yomiuri Shimbun also pointed out, “At a time when Japan faces a national crisis over an infectious disease, political stability must not be undermined.” It also called for an early election of the LDP president, saying: “The ruling Liberal Democratic Party is required to select a new leader as soon as possible to avoid confusion.”

Meanwhile, the Asahi Shimbun concluded, “In actual fact, the Abe-run government has been deadlocked for some time both politically and in terms of policy-making due to arrogance and complacency, a result of his long stay in power. The administration was clearly losing public support.” It also commented on the upcoming LDP presidential race by saying, “His departure should start the process of curing this nation’s democracy, which has been deeply damaged during his lengthy tenure.”

The Mainichi Shimbun also criticized the Abe government by saying: “Standing out as a negative offshoot of the prolonged administration that spanned seven years and eight months was the distortion stemming from Abe’s dominance. It became common for senior bureaucrats to curry favor with the administration and surmise its intentions, because personnel affairs remained under the thumb of the Cabinet Bureau of Personnel Affairs.” The paper added, “While Abe succeeded in maintaining power for many years, a negative legacy accumulated in terms of policy measures and his style of politics.”

In contrast, Sankei insisted that “the Abe government has made significant achievements among past LDP cabinets” because Abe had rebuilt the alliance with the U.S. and enacted the security-related bills to allow the limited use of the right to collective self-defense amid rising threats from China, including its maritime expansion. The paper said, “The prime minister had ensured the safety of the public amid an increasingly severe security environment” and asked his successor to continue this approach.

Yomiuri also pointed out, “It is also commendable that Abe has reviewed security policy based on the Japan-U.S. alliance amid a tense security environment.” It also praised Abe, saying: “The prime minister enacted security-related laws that allow Japan to exercise its right to collective self-defense in a limited manner. His approach to increasing the effectiveness of the Japan-U.S. Security Treaty makes sense as the treaty stipulates obligations for the United States to defend Japan.”

The Nikkei also insisted: “Abe brought the alliance with the U.S. back on track after it soured under the government led by the now-defunct Democratic Party of Japan. The enactment of the security-related bills met with strong opposition, but it deserves a degree of praise given the worsening security environment in East Asia.”

But the Abe government has not succeeded in the major task of allaying public anxiety over the new coronavirus outbreak. It is undeniable that the confusion over the special cash payments and the distribution of the “Abenomask,” which failed to gain public support, fed the public’s distrust arising from the insufficient release of information. It was also disappointing that Abe did not hold a press conference at the Prime Minister’s Office for more than two months and failed to  talk direct to the public.

The economic consequences of the coronavirus pandemic will be severe. The public is calling for strong leadership to deal with a possible increase in the number of bankruptcies and the unemployed.