JAXA: Hayabusa2 capsule to be released on Dec. 5 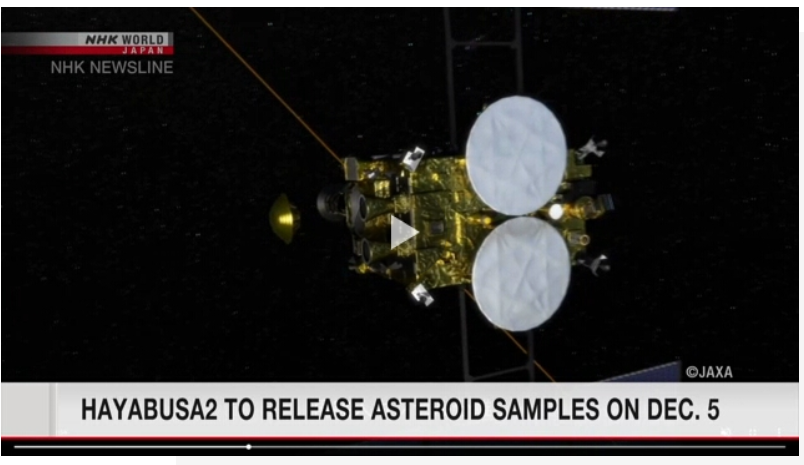 Japan’s space agency says its probe Hayabusa2 is scheduled to release in early December a capsule believed to contain samples of an asteroid. The capsule will be disengaged at a position about 220,000 kilometers away from Earth and will then make its way back home.

A team of scientists at the Japan Aerospace Exploration Agency, or JAXA, aims to bring back sand and other materials from the asteroid Ryugu’s surface with the Hayabusa2.

The probe touched down on the asteroid twice, and is heading back to Earth.

The team told reporters on Wednesday that from around November 25 Japan time, the Hayabusa2’s orbit will be oriented toward Australia.

The scientists said the capsule will be separated from the probe between 2 p.m. and 3 p.m. on December 5 at a location about 220,000 kilometers from Earth. They said the capsule is expected to land in a desert in southern Australia about 12 hours later.

They also said that after the release, the Hayabusa2 will take images of the capsule falling into the Earth’s atmosphere. The craft will be sent to another asteroid on a separate mission.

The project manager, Tsuda Yuichi, said the time between the morning and the evening of December 5 will be critical because it involves the work for the capsule’s release and then the ignition of the probe’s engine.