TOKYO — Japanese businesspeople are growing wary of China, a recent survey by the Japan Center for Economic Research and Nikkei found.

The survey found nearly half the respondents supported U.S. President Donald Trump’s tough China policy. Fully 43.7% cited “high tech that can be diverted to military purposes” as an area where Japan should restrict dealings with China. The results suggest businesspeople are growing more concerned about the risk of technology leaks and financial losses from dealing with China than they are excited by the country’s vast market.

The online survey conducted in mid-July asked 3,000 businesspeople working for listed Japanese companies to gauge their stance on the U.S. and China. About 1,100 of those surveyed had done work related to China.

The Trump administration has raised retaliatory tariffs on Chinese products in stages since 2018. It has also grown increasingly nervous that American entities dealing with China’s high-tech companies could have their data stolen. The Defense Authorization Act, which went into effect on Aug. 13, lists a number of Chinese companies, including telecom equipment maker Huawei Technologies, and prohibits companies with U.S. government contracts from using products or services from companies on the “entity list.”

Nearly half of those asked — 48.1% — supported the thrust of the Trump administration’s China policy, compared with 36.9% who said they did not support it. Washington naming specific Chinese companies and restricting deals with them was supported by 51.6% of respondents. Many of those people had experience doing business with Chinese.

In view of the growing economic tension between the U.S. and China, the survey asked businesspeople which areas Japan should reconsider with respect to China. In response to this multiple-choice question, over 40% mentioned “high-tech, including technologies that can be diverted to military purposes,” followed by 36.6% who cited “funding, including Japanese investment in China and Chinese investment in Japan.”

Growing wariness over Chinese President Xi Jinping’s iron-fisted policies at home and abroad appears to be increasing support among respondents for the hard-line U.S. approach toward Beijing. In late June, China enacted a new national security law for Hong Kong, the scope of which extends to foreign residents and businesses. In the survey, about 60% of respondents said China’s stated “one country, two systems” principle will collapse.

About 60% said Hong Kong’s appeal as an investment destination and business hub will diminish as a result. In particular, 70.4% of respondents at the president, officer and general-manager level, and 67.3% of those who have dealings with China in their work, said the one country, two systems framework will not survive, highlighting growing unease over the future of the territory.

In recent years, many Japanese companies have tied up with Chinese partners in cutting edge technologies. Despite this, 46.2% said Japanese companies “should reduce” tie-ups with and investment in Chinese companies and research entities, compared with just 18.4% who said such collaboration should increase. 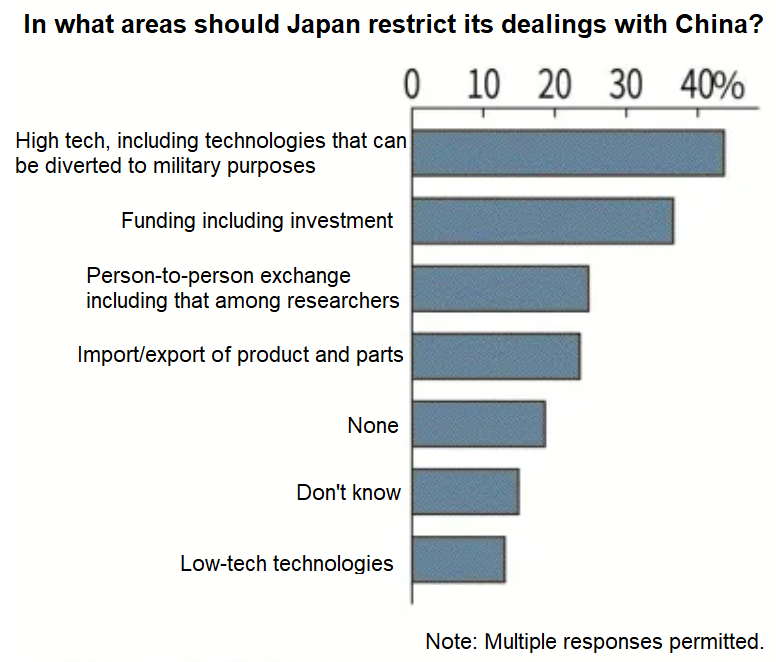 Asked to name areas where Japan should push for greater cooperation with China, the largest group — 45.1% — named the environment. Security was the next highest, cited by 34.6% of respondents. Intergovernmental exchanges was third on the list, with 28.1% of people saying this was an area where China and Japan should work together. The responses appear to show that Japanese businesspeople believe full cooperation with China should be limited to areas that can help resolve international issues, while business ties should be limited.

Asked about economic ties between Japan and China, those surveyed gave mixed responses. While the largest share — 35.1% — said Japan “should not sever” such ties, almost as many — 31.6% — said it should. Twenty five percent said they “cannot choose either.” 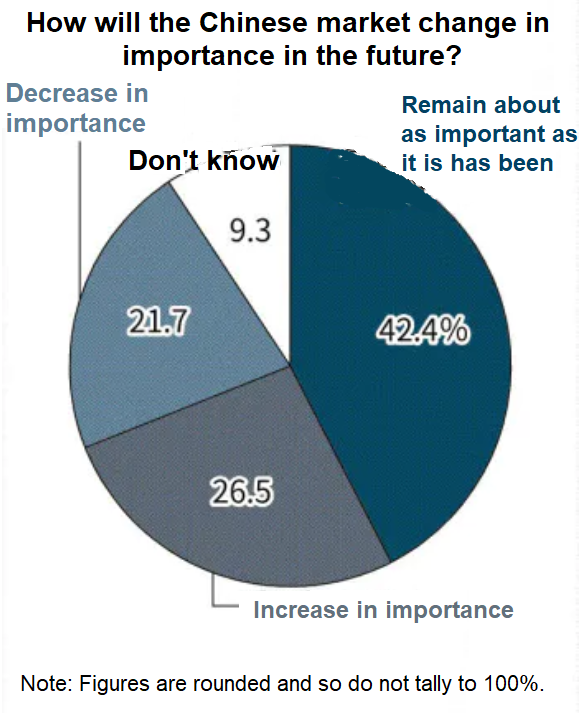 Japan, whose population is aging due to falling child births and longer life expectancy, has lagged behind other countries in some areas of high technology. As it struggles to maintain economic growth, businesspeople, though concerned about Japan’s declining role in production, and feeling threatened by China’s growing technological and financial might, continue to rely on Chinese demand.

“Japanese companies need to analyze the risks and prepare a response to the growing split between the U.S. and China,” said Shin Kawashima, a professor at the University of Tokyo involved in the survey. “They should communicate, in Japan as well as to the rest of the world, that an excessive divide will not be beneficial for the global economy.