38% of pollees say Suga is best to serve as next prime minister, Asahi poll 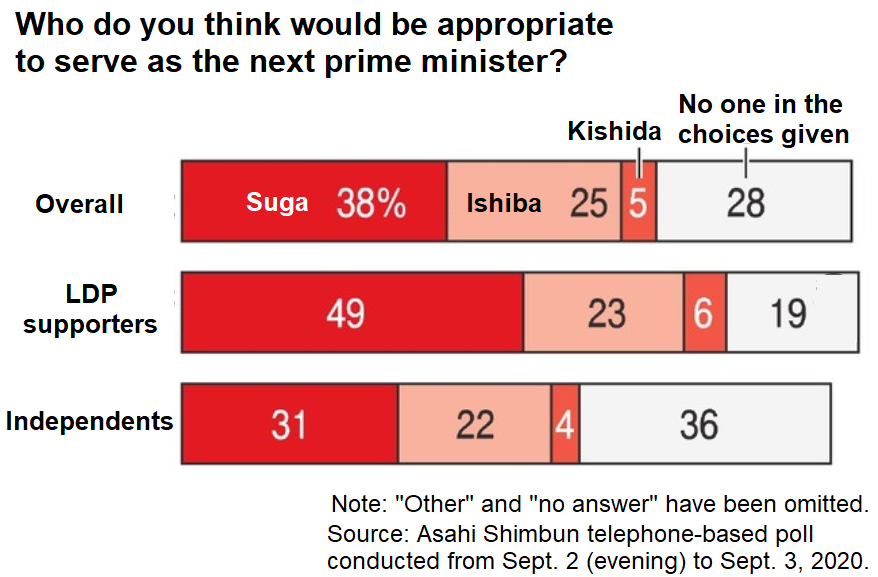 The telephone-based public opinion poll conducted by the Asahi Shimbun on Sept. 2–3 probed views on who would be best to succeed Shinzo Abe as prime minister. Abe announced his resignation [last Friday]. Some 38% of respondents said that Chief Cabinet Secretary Yoshihide Suga would be best, making him the most frequently given response. Next was former Liberal Democratic Party (LDP) Secretary-General Shigeru Ishiba at 25% and LDP Policy Research Council Chairperson Fumio Kishida at 5%. The survey question asked respondents to select their answer from among the three people who have already announced their candidacy for LDP president. Some 28% of respondents said “No one on this list.”

The Asahi poll conducted in June asked who would be appropriate to serve as the next LDP president and gave respondents seven names to select from. Some 31% of respondents selected Ishiba, making him the top runner. Suga garnered only 3%. The September poll reveals a major reversal.

By political party supported, 49% of LDP supporters selected Suga in the recent survey, easily outnumbering the 23% who selected Ishiba. Some 31% of independents chose Suga while 22% selected Ishiba.

Asked what the next prime minister needs most, 37% of all pollees said “leadership,” 32% said “fairness and integrity,” 15% said “policies and principles,” and 11% said “ability to coordinate diverse views.”

Respondents were split on whether the next prime minister should continue the policies of the Abe administration, with 45% of respondents saying it should and 42% saying it should not. Some 59% of pollees who would like to see a continuation said that Suga is most appropriate as the next prime minister, while only 13% of this group selected Ishiba. Some 37% of pollees who said they do not want to see the next administration be a continuation of the Abe cabinet selected Ishiba while only 17% selected Suga.

The LDP presidential election, which will be held on Sept. 14, will be a vote by the LDP’s Diet members and the representatives of the LDP’s prefectural chapters. It will not include a vote by rank-and-file party members nationwide. Some 60% of respondents that this way of electing the president is not good, while 30% said it was. Among LDP supporters, 49% said that the method is not good and 44% said it is.

Some 23% of all pollees said that the Lower House should be dissolved and a general election held “within this year” (July poll: 27%) while 68% said it should be done next year (60%).